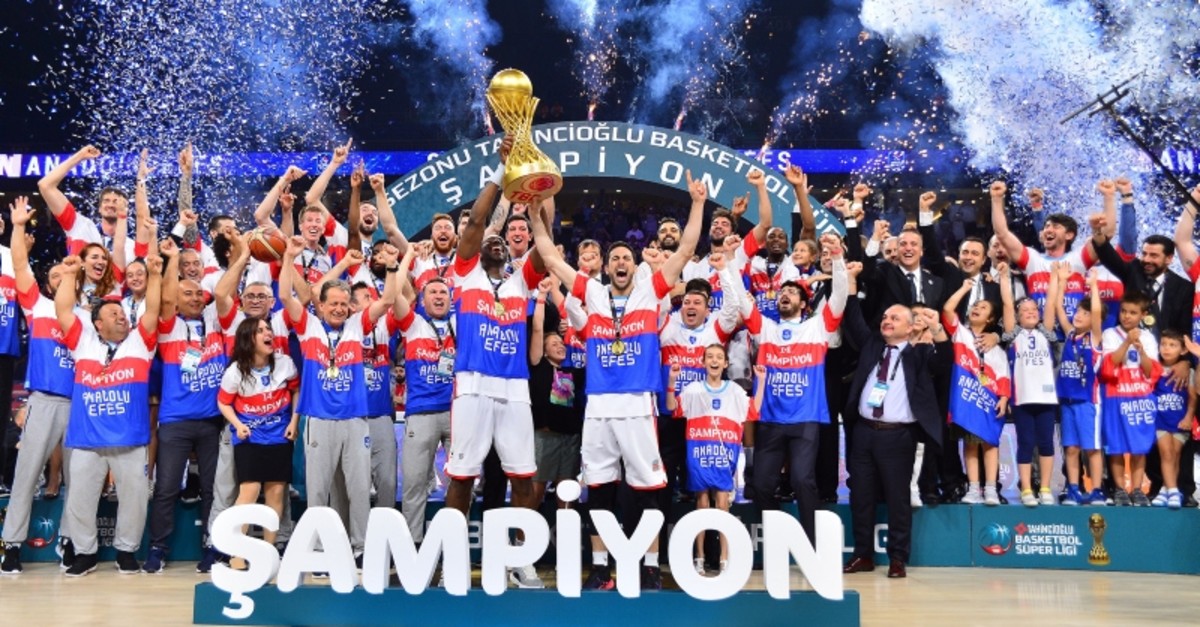 Anadolu Efes beats Fenerbahçe Beko 89-74 in Game 7 of the Turkish basketball finals to claim its 14th championship title and end a 10-year curse.

Efes won the nail-biting final series 4-3 to lift the trophy at their home Sinan Erdem Dome.

His extraordinary feat carried him to be named the match's Most Valuable Player (MVP).

The other key factor for Efes' triumph over Fenerbahçe was their success at the free throw line as Anadolu Efes scored all 21 free throws in the game.

Anadolu Efes celebrated their success with fans after the final buzzer as Fenerbahçe players watched them receiving the cup on the court.

Turkish basketball league playoff-finals were extended to Game 7 following the Fenerbahçe Beko win against Anadolu Efes 85-69 on Wednesday, bringing the series to 3-3.

Anadolu Efes last won the Super Lig title in 2009. Despite their 10-year league title drought, Efes still have the most championships under their belt with 14 titles.

Efes completed the regular season at first place. The Navy-whites had the highest number of championships with 13 times in 52 seasons.

Having changed its name to Anadolu Efes in 2011, Efes Pilsen won its first title in 1979.

Between 2001 and 2005, the Istanbul team won four consecutive championships in the league.

Fenerbahçe Beko are one of the most successful clubs in Turkey with 12 championships in top basketball tier Süper Lig. The club also have six Turkish Cups, and seven Turkish Super Cups in their history.

Following the Zeljko Obradovic's appointment as a head coach of the Fenerbahce in 2013, the ''Yellow Canaries'' had significant achievements in both national and international organizations, winning the Turkish Airlines EuroLeague trophy in 2017.

The 53-year-old coach previously won the Turkish Basketball Süper Lig title with the Anadolu Efes in 2009, Beşiktaş in 2012 and Galatasaray in 2013.

All tickets for the game were sold out. Around 20,000 fans flocked to Sinan Erdem Dome on Friday night.