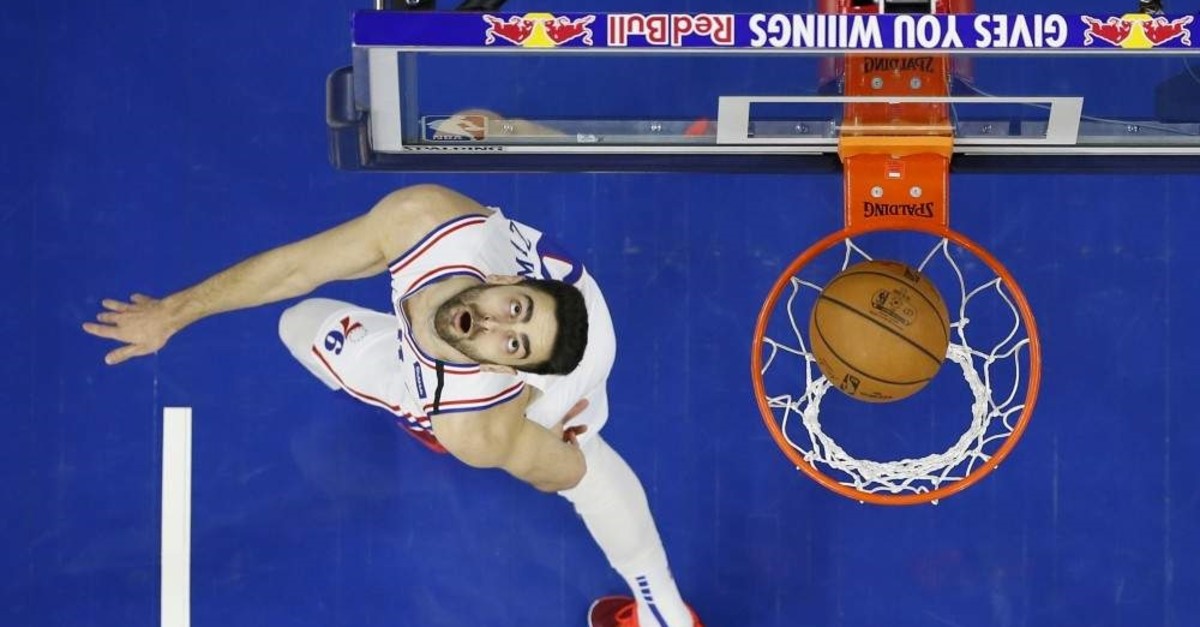 Philadelphia 76ers' Furkan Korkmaz watches his shot during the first half of an NBA basketball game against the Chicago Bulls, Sunday, Feb. 9, 2020, in Philadelphia. (AP Photo)
by Associated Press Feb 10, 2020 9:45 am

The 76ers made a trade for a pair of outside shooters to help make a deep run in the playoffs. Turns out, the player they needed might have been there the whole time. Furkan Korkmaz topped 30 points for the second straight contest with 31, Joel Embiid had 28 points and 12 rebounds, and Philadelphia beat the Chicago Bulls 118-111 on Sunday night to improve their NBA-best home record to 24-2. Korkmaz made 12 of 17 field goals, going 6 of 11 on 3-pointers. He stayed hot after netting a career-high 34 points in Friday’s 119-107 home win over Memphis in which he drained 13 of 17 shots and was 7 of 9 on 3-pointers. “I’m just trying to play my best basketball, and my strongest part of my game is shooting,” he said. The 76ers acquired wings Glenn Robinson III and Alec Burks at the trade deadline. Although it appears otherwise, Korkmaz says it’s just a coincidence that he’s had the best two games of his career on back-to-back nights since the trade. “It’s not really about that,” he said. “It’s just trying to help the team on the court. I’m trying to put the team first. I’m really happy I’m helping my teammates.”

Ben Simmons added 19 points, 10 assists and 10 rebounds for the 76ers. Zach LaVine scored 32 points and Luke Kornet added 25 for the shorthanded Bulls, who have lost five straight. “I thought we played hard, I thought we played together, I thought we got a lot from a lot of guys,” Bulls coach Jim Boylen said. “They’ve got a good basketball team.”

Embiid put Philadelphia ahead for good early in the fourth, breaking a tie to start the period with a short jumper and follow dunk that made it 87-83 with 11 minutes left. The 76ers kept the lead the rest of the way – although it wasn’t exactly easy against the plucky and undermanned Bulls. Chicago got within two points twice, but the 76ers finally got some breathing room on Tobias Harris’ 3 that made it 104-95 with 6:22 to play. Korkmaz put it away with a two-possession sequence where he hit a 3-pointer and followed with a one-handed dunk that pushed him over 30 points for the second straight contest and made it 111-101 with 3:57 left. Despite his statistics, Embiid still felt his performance fell below his standards. “I didn’t shoot the ball well, didn’t play well, just not myself, it’s frustrating, just have to keep trying to get better,” he said.

The 76ers’ All-Star center put his index finger to his mouth and appeared to yell, “Shut up!” after draining a 3-pointer with 38 seconds left. Asked if he was directing that at Philadelphia fans, who loudly booed the 76ers when they went down 65-62 early in the third quarter, Embiid responded this way: “I don’t care how it looks. Just playing basketball. Just getting back to myself ... Just playing basketball and trying to dominate.”