The mystery of Room 411, where Agatha Christie stayed 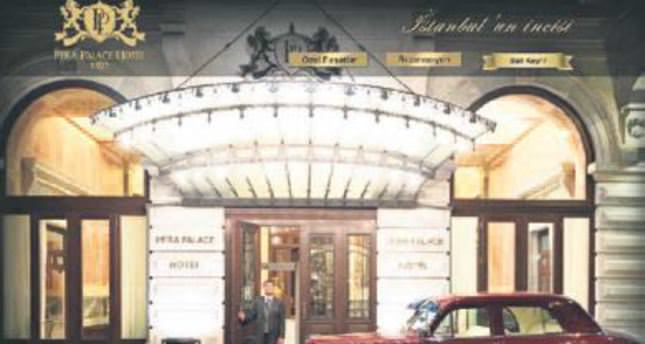 by Kaya Genç Jul 14, 2014 12:00 am
Agatha Christie's room in Pera Palace has a reputation for being mysterious. Some believe that it contains the secrets of its most famous guest.
When the queen of mystery disappeared from her house in Berkshire in 1926 after an emotional crisis, most probably caused by her husband's infidelities, there was intense speculation in the press about her whereabouts. Christie said she was going for a drive and the police found her car abandoned on the side of a road the following day. Almost two weeks later she reemerged at a Yorkshire hotel, after fans of the writer had identified Christie and informed the police. In 1979 Michael Apted made a stylish film about the incident (with Vanessa Redgrave and Dustin Hoffman in the leading roles) but there was so little information about Christie's disappearance that he had to ask for assistance from supernatural forces while working on the script.

Christie had never written or talked about her lost days, which forced Apted's team to make the unorthodox decision to travel to Pera Palace in Istanbul, a favorite place of the author. Christie allegedly wrote "Murder on the Orient Express," perhaps her most famous detective novel, in room 411. In order to learn details about her stay in Istanbul, producers hired a famous medium in Los Angeles who, after getting handsomely paid, claimed to have received the following message from Christie's ghost: "The key to my disappearance lies at Pera Palace." This led to the discovery of a real key beneath the floorboards of Christie's room and to describe the coverage of the event in Turkish and American press as frantic would not be an overstatement.

So what better place is there to think about the mystery of Christie's key and her secrets than in Christie's room at the heart of Istanbul? Room 411 still exists, albeit in refurbished form, and spending a few days there can be an inspiring experience for fans of detective novels and unsolved mysteries. The room also provides its owners with business opportunities which they seem to be taking advantage of through a new offering.
The other day I received an e-mail from Pera Palace about their most famous room. The subject line read: "The Murder on the Orient Express to be rewritten in the Pera Palace, eighty years after its publication." They promote this special package with the eye-catching, and rather sci-fi sounding name: "Time Travel with Agatha."

The offer is valid until Dec. 31, 2014, and includes accommodation for two people at Room 411. Guests are to be greeted by the hotel personnel with various drinks devoted to celebrities who had once stayed at Pera Palace (the list includes Mustafa Kemal Atatürk, Alfred Hitchcock, Ian Fleming, King Edward VIII, Mata Hari and Ernest Hemingway, among others).

The tour also features a visit to Sirkeci Terminal and the Terminal Museum, where guests can get better acquainted with the history of the now defunct Orient Express. There are special delicacies offered during dinner time. They may potentially have something to do with Christie and her book. Last, but not least, the guests will be offered a copy of "Murder on the Orient Express." That copy better be a stylish one, since the package's cleverly devised price tag is not so cheap: 411 euros for a night, for two persons. In other words, nice room if you can afford it.

Perhaps one should be grateful, rather than cynical, about the fact that the Pera Palace can still exist in a city that changes so rapidly. The readers of "Murder on the Orient Express" will know that when he came to Istanbul, the great Belgian detective Hercule Poirot hadn't booked a room at Pera Palace but preferred to stay at Tokatlıyan Hotel on Istiklal Avenue. Poor Poirot was summoned to go back to England only moments after arriving at the reception. A "Time Travel with Hercule" holiday package would be an impossible proposition, since neither Tokatlıyan Hotel nor the Orient Express exists today.
Last Update: Jul 14, 2014 11:40 am
RELATED TOPICS