Turkey to be honored guest at Beijing Book Fair 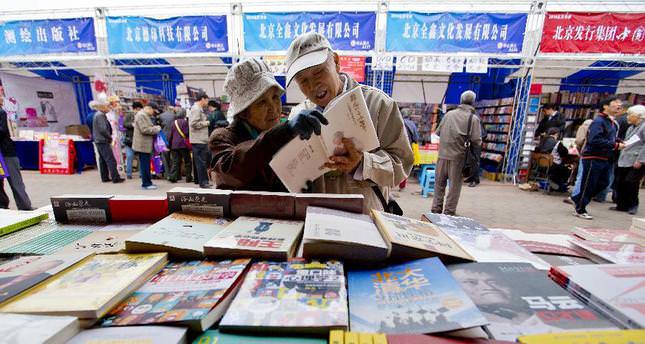 by Daily Sabah Aug 08, 2014 12:00 am
Turkey has been invited as an honorable guest to the largest publishing industry event in the Asian market, the Beijing International Book Fair (BIBF), which will take place this year in China between Aug. 27 and Aug. 31. Turkey's Culture and Tourism Ministry and the Organization Committee of National Book Fairs recently gave a press meeting at the Hilton Bosphorus Hotel along with representatives from the literature and publishing world. Culture and Tourism Deputy Minister Abdurrahman Arıcı said the program of "Country of Honor: Turkey" was organized in collaboration with Turkey's Education Ministry, Istanbul Chamber of Commerce (İTO), National Book Fair Organization Committee, Turkish Religious Foundation and Turkish Airlines (THY). The opening ceremony will be held on Aug. 26. "Turkey is allocated three stands spreading across 932,000 square meters.

An exhibition including 3,000 books of Turkish contemporary and classic literature will be on display," Arıcı said. There will also be workshops on traditional Turkish art such as calligraphy, ornamentation and marbling. Nine copyright agencies under Turkey's Culture and Tourism Ministry will be available for interested visitors. As well as that, 20 publishing houses supported by the ministry will make presentations. The national stand will host exhibitions such as "Skylife Kültür Destinasyonları" (Skylife Culture Destinations), "Çin'den Görünen Osmanlı" (Ottomans from a Chinese Perspective), "Anadolu Halk Oyuncakları" (Anatolian Folk Toys) and "Kubbeler Dijital" (Digital Domes) sponsored by Turkish Airlines. "The event program comprises of panels, presentations and discussions by a committee of 120 people including authors, researchers, publishers, artists and copyright officials," Arıcı said.

There will be five professional panels delving into the world of Turkish publishing industry. Among the hot topics mentioned are the FATİH project (Movement of Enhancing Opportunities and Improving Technology), new employment opportunities in digital publishing, copyright system in Turkey and translation movement from Turkish to foreign languages. An exclusive panel will introduce the TEDA project (Translation and Publication Grant Program of Turkey). Some of translated works released by foreign publishing houses will be exhibited at the stand venue. Within the project's scope, 1,648 works were translated into foreign languages so far. China has agreed to publish 17 books as well. Arıcı said he hopes that the number will increase in the near future.
Last Update: Aug 08, 2014 1:10 am
RELATED TOPICS