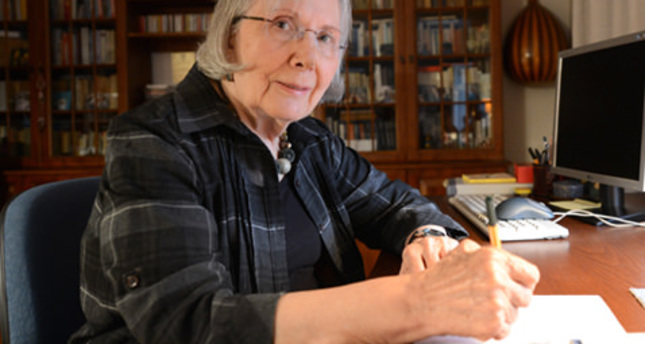 by Kaya Genç Oct 09, 2014 12:00 am
The Nobel Foundation recently published a statistic about Nobel laureates in literature. From 1901 to 2013, 110 writers were awarded the prize. Twenty-seven of those wrote in English. The top seats are occupied by authors writing in French (13), German (13), Spanish (11), Swedish (7), Italian (6) and Russian (5). The Turkish language has so far produced one laureate. Producing even one laureate is cause for celebration, especially when you think about the kind of treatment that laureate has received from Turkey's political and media establishments. Yiddish, Serbo-Croatian, Portuguese, Occitan, Icelandic, Hungarian, Hebrew, Finnish, Czech, Bengali and Arabic languages are also represented by a single author each, according to the Nobel Foundation's list. This year's literature prize will be announced today, perhaps a few hours after you read this article. Last week, the Turkish author and literary agent Barbaros Altuğ organised a poll through his Twitter account, and asked which Turkish author should be recommended to the academy. Yaşar Kemal was at the top of the list. His list of writers included Hasan Ali Toptaş, Adalet Ağaoğlu, Latife Tekin and Elif Şafak. I still remember that October day in 2006 when Orhan Pamuk was awarded the prize. I was in a Chinese restaurant, getting ready to fill my tray with plates of delicious Chinese food. Before I could eat anything a journalist phoned me to ask about my opinion concerning the prize. What prize, I asked him. "The Nobel prize!" he answered. "I need to get a quote from you." Leaving Chinese food behind, I headed to a silent corner.

Some novelists and poets had openly expressed their sadness at the time. "I will never get a Nobel Prize, this is given once every century, we are doomed!" was the shared tune of novelists and poets. But were they right? Is it really a once-in-a-century thing for a country? I did some research and came up with some encouraging statistics. Chinese authors were awarded the Nobel prize twice. Gao Xingijan was awarded in 2000, becoming the first Nobel laureate in literature of the new millennium. Only 12 years later, in 2012, Mo Yan was awarded the prize. The history of Chinese literature dates back to the Shang dynasty (1766 B.C. to 1122 B.C.). Two Nobel prizes for literature with a 3778 year-long tradition is not exactly good news for young Chinese writers, but the fact that both of those prizes were given in the course of 12 years is certainly encouraging. Greek literature was also awarded the Nobel prize twice. And when were those given? The first was awarded to the poet Giorgos Seferis in 1963. Only 16 years later Odysseas Elytis, another Greek poet, was awarded the literature prize. Finally, I come to Japanese literature, which had so far produced two Nobel literature laureates. The first, Yasunari Kawabata was awarded the prize "for his narrative mastery, which with great sensibility expresses the essence of the Japanese mind," in 1968. The second Japanese laureate was Kenzaburo Oe, "who with poetic force creates an imagined world, where life and myth condense to form a disconcerting picture of the human predicament today." Oe received the prize in 1994. What these numbers show us is crystal clear. When the Swedish Academy discovers a country's literature, that literature may be awarded two times, with short time periods between the prizes (12 years for Chinese writers, 16 for Greeks, and 26 for Japanese). So Turkey's novelists and poets have little to worry about. A second Nobel prize for Turkish literature can be just around the corner, although reaching there may yet take a few years, if not decades.