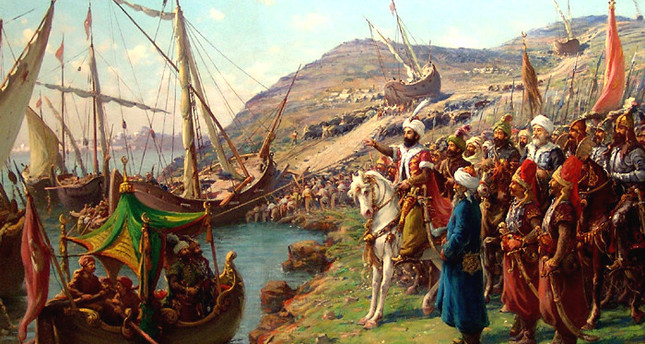 A literary work attributed to Sultan Mehmed II has been published by distinguished Professor Süheyl Ünver in a book entitled ‘Fatih’in Defteri’ (The Notebook of the Conqueror), republished by Kültür A.Ş., the cultural enterprise of the Istanbul Metropolitan Municipality

Ünver published the book in 1953 as a tribute to the 500th year of the conquest of Constantinople. Aside from the Ottoman miniatures, the unique ornamentations on the corners and edges of the pages are also eye-catching elements of the author's work. In aprevious statement, Ünver said he prepared only one copy, as if he was going to present it to Sultan Mehmed II. The late professor wanted to record the nation's intangible cultural asset and said that each historical artifact should be turned into a written document. This is because he created a number of works on the history of Islam and the Ottoman Empire. He further showed his artistic skills by adding his watercolor paintings to his work, bringing them a visual character.

Among his writings, "The Notebook of the Conqueror" is recognized as the most important one and was republished in its original form with the contributions of Professor İsmail Kara. Ünver's daughter Gülbün Mesara previously recorded her father's descriptions of miniatures and these were also added to the latest version of the book. Ünver's book features drawings of the Fatih Mosque, Harbi prayer room, a mosque in Çanakkale, the madrasahs in the Fatih district, the treasury of Topkapı Palace, Bab-ı Hümayun (Imperial Gate), Cihannüma Mansion of the Edirne Palace, Çinili Mansion, the old imperial palace, the Rumeli Fortress, the Yedikule neighborhood, Ottoman guest houses and hospitals. There are a few blank pages intentionally left by Ünver to allow readers to rest their eyes while reading. The book's introduction cites Ünver's own comments about his work.

Born in Istanbul, Sühely Ünver was both an author and physician. He passed away on Feb. 14, 1896 at his house in Kalamış when he was 88 years old. He spent his 75 years reading, studying, creating manuscripts, writing and composing an archive saved in special document cases and envelopes. He published many scientific and newspaper articles, books and leaflets and was interested in poetry. As a physician, he was a prestigious representative of Turkish medical history and participated in a number of international and national congresses and presented articles. Ünver was the founder and a member of the Institution for the History of Turkish Medicine along with other memberships at the International Society for the History of Medicine, the Turkish Historical Society, the Turkish Language Association and Turkey's Medicine Committee.