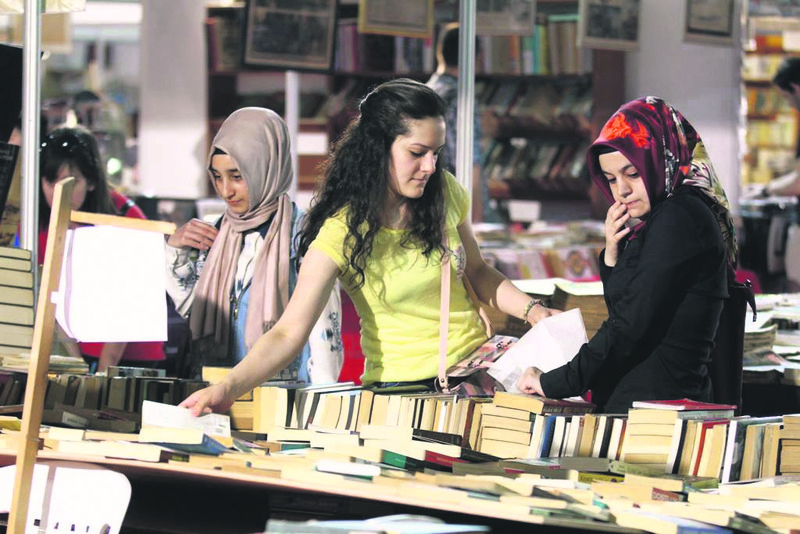 Opened for visitors on Saturday, the Kocaeli Book Fair brings together 350 publishing houses, 42 second-hand book sellers and 67 NGOs. The fair, which is the biggest in Turkey, will host many well-known authors

The Kocaeli Book Fair, the biggest in Turkey, is open at the International Fair Center until May 24. Speaking at a press conference at the Sekapark Hotel, General Secretary of Kocaeli Metropolitan Municipality Associate Professor Tahir Büyükakın said, "The book fair that we have been organizing for the last seven years has contributed to Kocaeli's identity. It is time for trees to blossom books again. We expect a record attendance to the seventh Kocaeli Book Fair."

Büyükakın said that the Kocaeli Book Fair welcomes a record number of visitors every year and continued, "The spring has come for books in Kocaeli. Qualified man power is the real source of a country's richness. People who build the world are those who are equipped and have great knowledge." He said the number of people who are reading books is important to determine a country's world ranking and added that they are proud to organize the seventh Book Fair in Kocaeli as a municipality that values the importance of reading books. "Every year, we prepare for the fair with joy. Everybody in the province supports the book fair and we are appreciated for our efforts," Büyükakın said. Vice Chancellor of Kocaeli University Çakır and Provincial Director of National Education Çelik thanked the Kocaeli Metropolitan Municipality for organizing the book fair and said that they will continue to contribute to the event.

As a part of the seventh Kocaeli Book Fair events, a commemorative ceremony for the late Yaşar Kemal was held at Kocaeli University. Writer Nebil Özgentürk, Işık Öğütçü and Ahmet Ümit talked about Kemal, who passed away a short time ago. Moreover Kahraman Tazeoğlu as well as comedian Ceyhun Yılmaz, social media phenomenons Taci Kalkavan and Argostroloji met with the students at Kocaeli University on May 13. Nuri Pakdil, the writer of "Yazmak Bir Mucize" (Writing Is A Miracle), "Bir Yazarın Notları" (Notes of A Writer) and "Edebiyat Kulesi" (The Tower of Literature), attended the opening ceremony of the book fair at the International Fair Center, which was overseen by the Minister of Science, Industry and Technology Fikri Işık. Also, the TV series "Diriliş Ertuğrul" (Resurrection Ertuğrul) was chosen as the best TV series of 2015 in the student vote and was granted an award at the ceremony.

As a part of the book fair, the Association of Tabloid Journalists will choose the best of the tabloids with the cooperation of Kocaeli University and hold conferences titled "Caricature, humor, Society and Book," "Woman and Violence," "Should I Read it or Not," "The Effects of Reading on Professional Life" and "New Media Order: Digital Age."The seventh Kocaeli Book Fair, which opened its doors with the aim of a record attendance, features 350 publishing houses, 42 second hand book sellers and 67 NGOs.

lity. Children will be able to discuss the book with the writer during the fair. Also, the Ministry of National Education will open a stand at the book fair to introduce its Fatih Project, which is one of the most important works of the ministry on informatics.