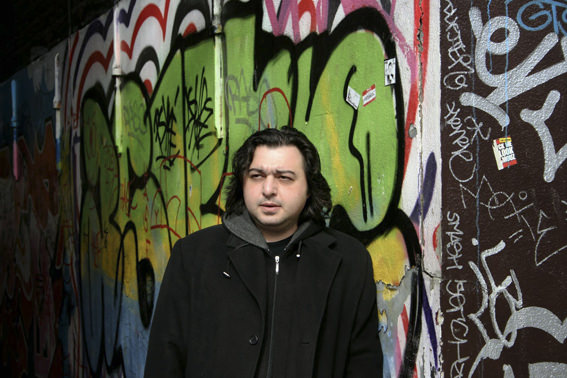 The British Council brings together creative writers from the United Kingdom and Turkey under the "Writers Meet" program, that offers an opportunity to witness on-site, an entertaining conversation between leading writers from two cultures

Organized by the British Council, the program "Writer Meet" will kick off in collaboration with Pera Museum in Istanbul on Feb. 18, Thursday, when Hanif Kureishi and Murathan Mungan will meet. Aslı E. Perker will moderate the program, during which writers will read selected sections from their books and talk about their works and writing practice. The program will continue in Istanbul, İzmir and Ankara with meetings featuring Paul McVeigh, Sema Kaygusuz, Ned Beauman and Hakan Günday.

Following Turkey's cultural program at the London Book Fair, the Writers Meet program meets leading literary figures from Turkey and the United Kingdom. The first of these meetings will bring together Kureishi, the screenwriter of the movie "My Beautiful Laundrette," which was nominated for an Oscar, and Mungan, the renowned poet and writer, at Pera Museum on Feb. 18at 7 p.m. The meetings, during which the writers will share their experiences with literature fans, will reveal how rich the literature of the two countries is. The "Writers Meet" program will continue in Istanbul, Ankara and İzmir until March 3.

Having written many novels and screenplays, Kureishi, a British writer of Pakistani descent, is one of the leading writers in the United Kingdom. Kureishi says, "If you wanted to work in theater, as I did, it is impossible to escape the argument that culture is inevitably political." In his play "Borderline," which was staged by the Royal Court Theatre in the 1970s, Kureishi tackled the issue of immigrants, a major item on today's agenda. The play, which focuses on Asian immigrants in Southall, was followed by "My Beautiful Launderette," a screenplay written by Kureishi and very much liked in Turkey. "The Buddha of Suburbia," "The Body, Intimacy" and "The Black Album" are among the books by Kureishi that have been translated into Turkish.

In the first series of the Writers Talk, Kureishi will be accompanied by Mungan, a leading writer in Turkish literature, whose works have been translated into 12 languages including Persian and Norwegian. A writer, poet and screenwriter at the same time, Mungan talks about his childhood memories in "Harita Metod Defteri" (Map Method Notebook), his latest book. Having published more than 15 poetry books such as "Osmanlıya Dair Hikayat" (Stories about the Ottoman Empire), "Yaz Geçer" (Summer Too Passes) and "Metal," Mungan also writes literary reviews and political articles in addition to his stories, novels and plays. Based on "Yakınlık," the writer's third novel, and his other stories, the movie "Mahremiyet" (Intimacy) was produced in 2001 and received the Golden Bear Award at the Berlin International Film Festival.

Another meeting will be between Paul McVeigh and Sema Kaygusuz on Feb. 24 in İzmir. Paul McVeigh has written plays, comedy shows, short stories and a novel. His short fiction has been published in journals and anthologies and been commissioned by BBC Radio 4. He has read his work on BBC Radio 5 and at festivals in Belfast, Brighton, Cork and Vienna and upcoming Wroclaw and Melbourne. His novel "The Good Son" was published in April 2015 to wide critical acclaim. Paul is director of the London Short Story Festival and Associate Director at Word Factory, the U.K.'s leading short story literary salon. His blog for writers gets 40,000 hits a month where he has interviewed authors including Mary Costello, Kevin Barry and George Saunders.

Kaygusuz is a fiction writer living in Istanbul. After publishing three collections of short stories, which won some of the most prestigious literary awards in Turkey, her first novel "Yere Düşen Dualar" (Prayers Falling on Earth) was published in 2006. The novel met unanimous acclaim from both Turkish and international reviewers and won the 2009 Ecrimed-Cultura translation award, the 2010 France-Turquie award in France, and the 2010 Balkanika award including six Balkan countries. Her second novel, "Yüzünde Bir Yer" (A Place on Your Face), was published in 2009 and praised as the "literary Guernica" and published in April 2013 by Actes Sud in France. Her most recent narration "Karaduygun" (Melancholic) was published in 2012 and in Turkey and in March 2013 by Matthes & Seitz in Germany. Kaygusuz was also the co-author of the movie script of "Pandora's Box," which won the Golden Shell Best Film Awardin 2008.

British author Ned Beaumann will meet successful Turkish author Hakan Günday on March 2 in Ankara. Beauman was born in London in 1985 andhas written three novels: "Boxer, Beetle," published by Sceptre in 2010, "The Teleporation Accident" in 2012 and "Glow" in 2014. In 2013, he was named one of the 20 best British writers under 40 by Granta magazine.