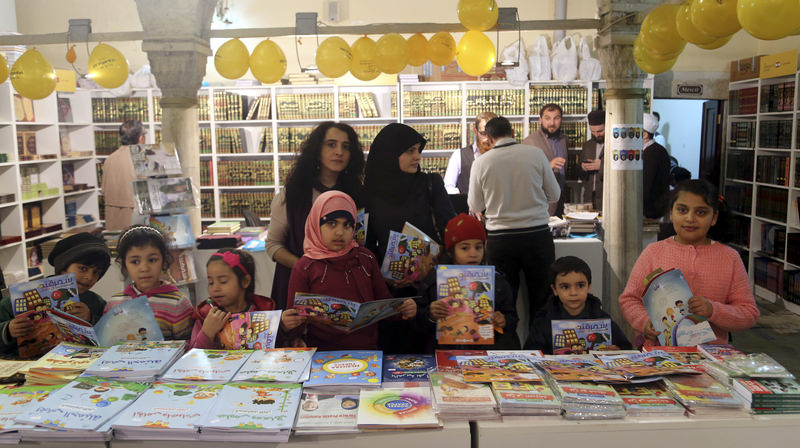 In a project launched specifically for the Turkey Arabic Book Fair, "Semerkant Arabic Children's Magazine" was introduced to refugee children at the fair on Feb.18.

Speaking at the fair, the editor-in-chief of Semerkant Arabic Children's Magazine, Hülya Çullu, said that she is a teacher in a special school for hearing impaired children. "I met a group of philanthropists who are offering aid to Syrian families in a café in Balat. I wanted to do something similar and decided to offer psychological therapy to Syrian children as it is aligned with my profession. I began helping refugee children, encouraging them to paint pictures upstairs in the same café," Çullu told an Anadolu Agency correspondent.

Çullu began to bring a group of Syrian children together in the upstairs area of the café where she offered painting therapy; however, the children were drawing mostly bloody images and flags. "They were drawing very interesting things," said Çullu. "For instance, one of the children drew a Syrian flag featuring a drawing of a heart. A child who could not have been older than seven years of age was trying to tell the world that his country has turned into a blood bath. The paintings these children drew mirrored how much they have been affected by the Syrian Civil War."

As time passed, the painting therapy that Çullu offered the refugee children began having positive results. The children began to paint flags, fish and symbols that signify peace and love. Through art, Çullu helped these children to overcome the traumatic experiences that they had to face back in their native country. "Even if they drew very traumatic images and symbols at first, they began to paint things such as flowers and birds like normal children, following a healthy and normal adaptation process," Çullu added.

The children's magazine, which is exclusively published for the Arabic Book Fair, features drawings of refugee children who worked with Çullu during the painting therapy and their good wishes for the future. The magazine reveals that the therapy helped children to overcome their psychological problems, while improving their artistic skills. The magazine also has a section, "Questions to Syrian Children," which is notable for some of the answers it uncovers.

For instance, nine-year-old Habbetullah Mustafa responded to various questions, such as "What are your favorite things?," "What do you expect from the future?" and "What would you like to say if you could make your voice heard by everyone in the world?" Mustafa answered: "I really like our neighbors because they are really good people. Moreover, I want to be a doctor to cure children. I want to tell the world to give us our country and the playground that we used to visit back." Çullu said that even these answers show how much these children are affected by the war. "All we want is to give them some relief by enabling them to paint," she added.

On the other hand, Syrian painter Fatma Zeyyat, who came to Istanbul two years ago with her husband and attended the painting therapy sessions with refugee children, said: "We could endure the bombings, but we were not able to bear the hunger. I went to 'Derviş Baba' in Balat, which is a café that offers help to Syrians trying to learn Turkish. After a while I began to teach there. I met Çullu in Balat and she encouraged me to paint again. "

Zeyyat said she learned Turkish and is now able to handle everything by herself. "My husband works as a porter. We are living in a small apartment, but at least we are safe and our stomachs are full. Our neighbors are really good people; they have been helping us since the beginning. I dedicate myself to painting in my spare time. I paint with Syrian children and offer them workshops. I was able to realize my childhood dream -- painting -- in Istanbul.

The children's magazine published by Semerkant Publishing will be distributed to refugee children at the Turkish Arabic Book Fair until Feb. 21.
Last Update: Feb 20, 2016 2:06 am
RELATED TOPICS