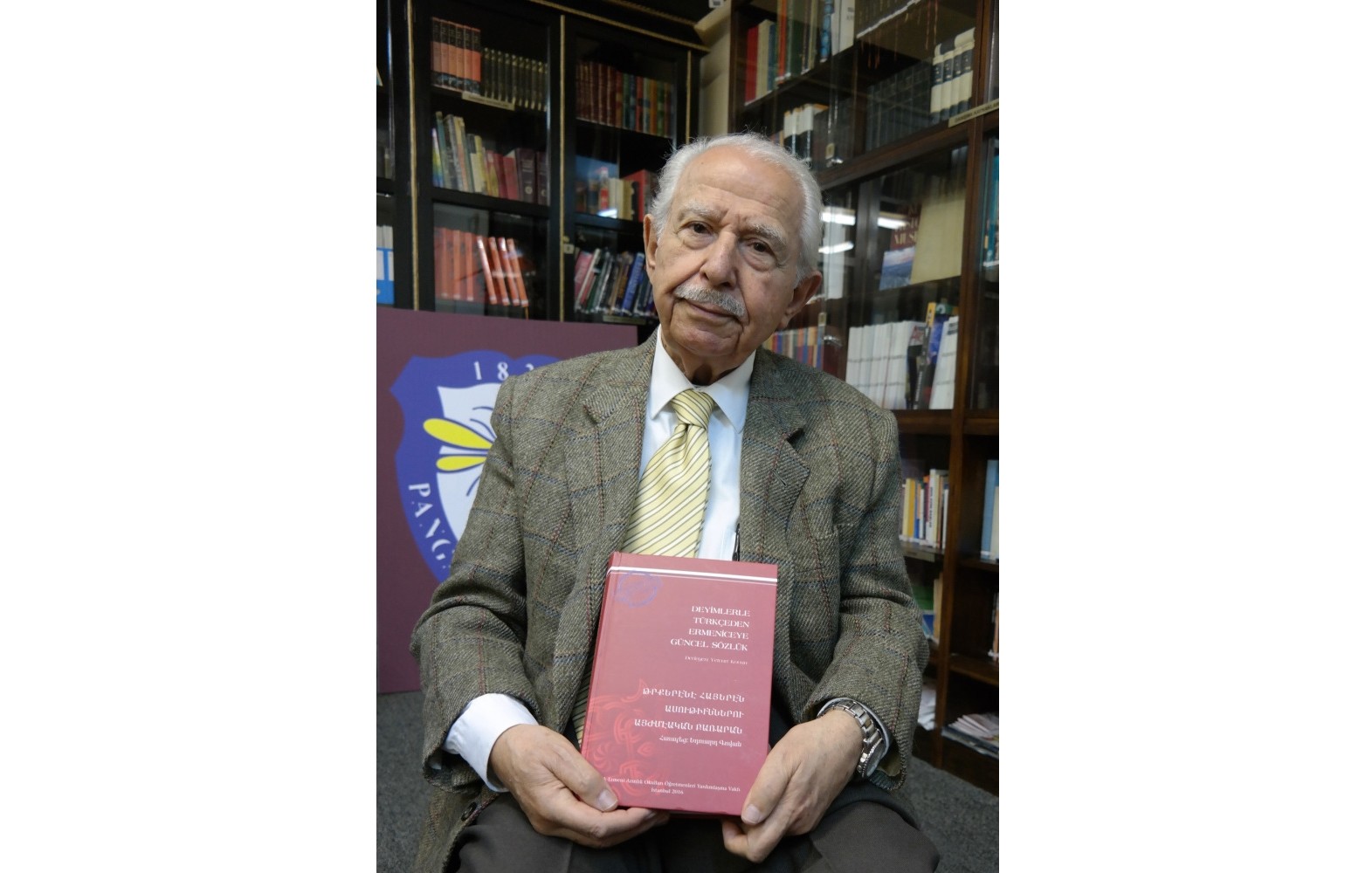 At 90, Turkish Armenian Yetvart Kovan prepared a comrehensive Turkish-to-Armenian dictionary which includes words, idioms and renowned book titles known to everyone in Turkey. The dictionary will help both cultures better understand each other better

The dictionary's writer, Yetvart Kovan, 90, spoke to Anadolu Agency (AA) and said that he published a dictionary for commerce and economic terms in 1996. "I always thought about publishing a dictionary that would be available for Armenians in Turkey as well as people who are interested in the Armenian language. This time, I studied more extensively and worked on idioms because idioms are rigid phrases, and they are easy to remember. Hence, I searched for the overlapping Armenian idioms for Turkish idioms by using articles in newspapers. It is not an ordinary dictionary as I enriched the text with idioms and useful information. My aim was to attract the attention of the reader and make it easy for people to read."

To facilitate reading, Kovan provided the pronunciation of Armenian words in Latin lettering, which is a first in Turkish-Armenian dictionaries. "Contemporary Turkish to Armenian Dictionary with Idioms" is roughly 900 pages and features 30,600 lines, including words, sentences and phrases. Kovan explained the reason for the dictionary's size is that the pronunciations of the Armenian words added extra pages to the dictionary. He also included English equivalents of some words and phrases, believing that they also will help.

Apart from words and idioms, he also included translations of renowned book titles, such as "Sinekli Bakkal" (The Clown and His Daughter), "Çalıkuşu" (The Wren), "The Count of Monte Cristo" and "Three Musketeers," to encourage people to read more books. "Furthermore, I added the mottos of Mustafa Kemal Atatürk, the founder of the Republic of Turkey, such as 'Our true mentor in life is science' and 'Justice is the foundation of the state'," Kovan said.

Kovan retired seven years ago after closing his public accountant office and had been working on the dictionary ever since. He said he wanted to make use of his free time and began studying dictionaries, but mostly focused on the Turkish Language Association's (TDK) online dictionary. "There are Turkish-Armenian dictionaries that were written 100 years ago, and they are very hard to read now. I wanted to include contemporary phrases, words and idioms in my dictionary," he said.

Kovan graduated from the Private Pangaltı Armenian School where he also taught accounting for 20 years. He said that the Armenian school is famous for its graduates who are important figures in Turkey's literature, such as Mehmet Kadir Keçeoğlu, who is known as Yaman Dede, Mithat Sadullah Sander, Halit Ziya Uşaklıgil, Ali Ekrem Bolayır, Kazım Nami Duru, Ahmet Hamdi Tanpınar and İstepan Gurdikyan. Kovan also said that he was a classmate of photographer Ara Güler in elementary school.

Kovan worked as a certified public accountant for years. "I worked for the state for a long time. Today, we are able to practice our own cultural and religious duties while contributing to Turkish culture as well. My dictionary is a work in which I studied Turkish culture."

"Unfortunately, the tradition of reading, writing and speaking in Western Armenian has weakened in Turkey as well as in other European countries," Kovan said. "Turkish-Armenians speak Turkish in their homes and schools. Apart from being the official language of the Republic of Turkey, one of the main reasons for Armenians to speak Turkish is that Turkish became much easier following the alphabet reform. There are certain difficulties in grammar and writing in Armenian, so people find it easy to speak and write in Turkish."

Noting that UNESCO included Western Armenian on its dead languages list, Kovan said that obituaries and even church announcements are published in Turkish.

Kovan published his dictionary on his 90th birthday. He was asked whether he would start a new project or not. "I

do not believe that I have enough time to initiate another project. But only God knows. I love reading and writing, but I do not think that I can take up another work at my age," he answered. He dedicated his dictionary to the Turkish Armenian Minority Schools Teacher's Fund, which is an education institution supporting Armenian schools in Turkey and also helps those who want to speak Armenian.

told AA that they provide textbooks for minority schools and publish some books under the name of their institution. Külegeç said that he met Kovan in 1963. "He previously published a book on economy and donated the copyright of the book to our institution. When he told me about the dictionary, I offered to publish it. It is a comprehensive Turkish-Armenian dictionary. The foundation is the sponsor of the book. I am very happy and proud of my teacher," Külegeç said.