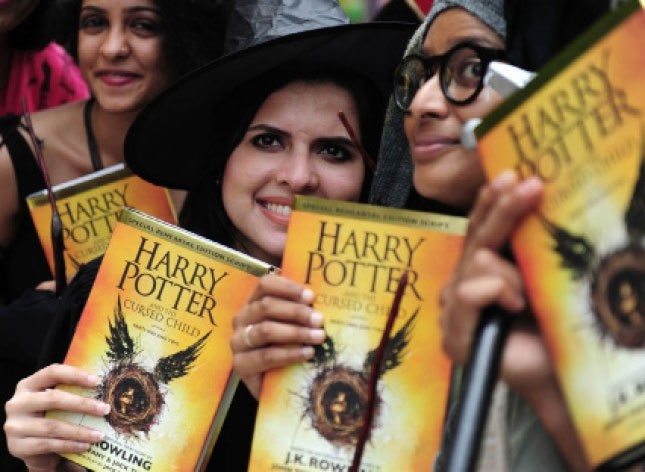 by Miraç Tapan Aug 03, 2016 12:00 am
The Potterheads have finally gotten their hands on the much-anticipated sequel of British writer J.K. Rowling's Harry Potter story on July 30. The eighth book of the series is a play script rather than a novel. The book, "Harry Potter and the Cursed Child - Parts I and II," which is the most pre-ordered book of the year, is set 19 years from when the seventh and final volume of the magical saga last left off.

The release of the book also coincided with the opening of first part of the namesake stage play in London's West End, which received five stars from critics, including Daily Telegraph critic Dominic Cavendish, who wrote: "British theatre hasn't known anything like it for decades and I haven't seen anything directly comparable in all my reviewing days."

Rowling, the writer and the creator of world's most famous wizard, however, spoke on the red carpet during the opening ceremony and delivered the worst news that Harry Potter fans could ever imagine. The writer said that the story of Harry potter is done for good this time. Rowling told Reuters: "[Harry] goes on a very big journey during these two plays and then, yeah, I think we're done," Rowling told Reuters on Saturday night. "This is the next generation, you know. So, I'm thrilled to see it realized so beautifully but, no, Harry is done now."

Yet Potterheads around the globe might have a chance to see the play live after all. Rowling said that the play might be staged on Broadway and beyond in order to reach as many Harry Potter fans as possible. So fans around the globe are crossing their fingers, hoping that the play might hit the theaters in their cities. However, all the tickets for the production in London are sold out until May 2017.

In the play, which takes place 19 years after Harry's graduation from Hogwarts, the grown up boy wizard works at the Ministry of Magic. The story focuses on the adventures of Harry Potter and Ginny Weasley's youngest son Albus Severus and his unexpected best friend Scorpius Malfoy, the son of Harry's nemesis Draco Malfoy.
RELATED TOPICS