A New Leaf: The Art of Pages Bookstore 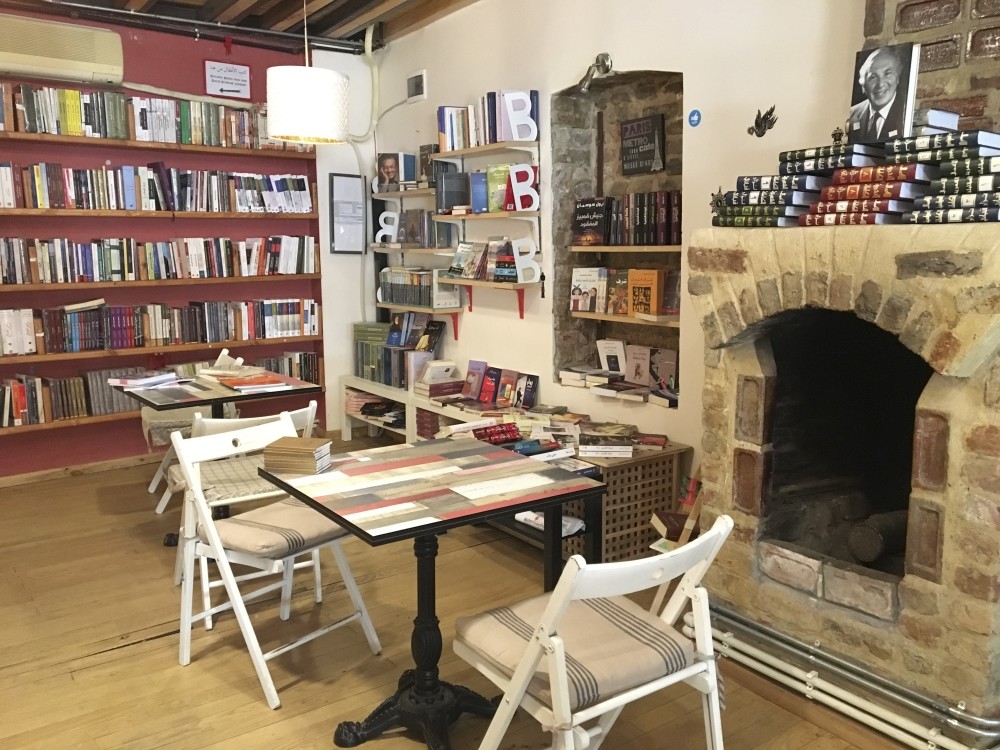 The library at the bookstore has a collection of Arabic and Turkish literature for all ages, as a house of wisdom dedicated to translation and community.
by Matt Hanson Aug 11, 2017 12:00 am

In the summer of 2015, the very first Arabic bookstore opened in Istanbul, earning due praise in the international press. Exiled from Damascus, artist and publisher Samer al-Kadri and his wife, children's book writer and painter Gulnar Hajo, established Pages Bookstore in the Golden Horn neighborhood of Ayvansaray Together, they founded a community with the true spirit and original intent of revolution as a creative movement

Over the bygone wooden planks of Galata Bridge, where the Ottoman subjects of Constantinople walked through time to become the Turkish citizens of Istanbul, the Golden Horn inlet below is an incandescent confluence of the Sea of Marmara and the Bosporus strait. Along its obstructed though walkable concrete boardwalk, the smoke of grilled fish wafts from the painfully constructed shoreline of splintering, derelict boats that seem moored for eternity.

And then a stunning maroon beacon of vinous French-imported brick angles upward into the sky like the proud flag of its ancient local Greek community. It is the Fener Greek Orthodox School, often mistaken for the Patriarchate where the head of the Greek Orthodox Church prays near to Gregorian chants as the first among equals. The Byzantine ambiance of the long lost holy city echoes beneath the manifold icons and dusty lamps of countless sacred sanctuaries and unburied saints. 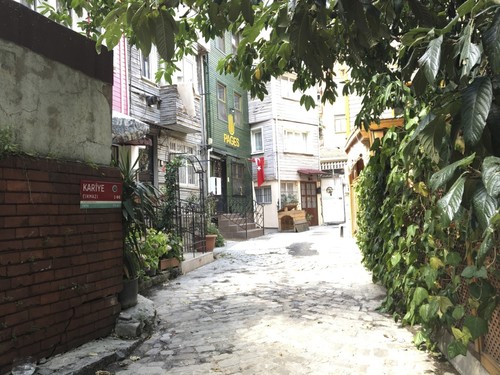 Pages Bookstore is on Kariye Street, named after the Chora Church and Museum, a major historical site in the sacred Byzantine cityscape now furnished with pieces by the Syrian literati.

Under the shadow of the school built like a masonic castle by 19th century architect Konstantinos Dimadis, the neighborhood storefronts are overrun with the familiar gentrification hustle of vintage clothing shops and third-generation espresso blenders. While controversial, the narrow, colorful streets of Fener weave a tapestry of urban revitalization.

Fener follows in step with a hard and fast principle that has developed in recent decades in global cities everywhere. First, artists and visionaries of all kinds navigate the hardest roads of conservatism and neglect, as they clear the way for cultural and historical appreciation with a mind for contemporary and future trends. With time, the cash registers of globalization follow, ringing with entrepreneurial investment and real estate value. The mixed ethnicities, faiths and classes of Fener and neighboring Balat are in the nascent, early stage when creative potential is practically breathable.

Gentrification is essentially another word for modernization, and it is most dramatically defined by the secular-to-religious split as seen in the Golden Horn neighborhoods of Istanbul and in Williamsburg, Brooklyn, for example. The most religious neighborhood in Istanbul is called Çarşamba, a short walk uphill from Fener. Its communities proudly wear the cübbe robe and takke caps. Like the tailors and scribes who file out from the tenements of the Orthodox Jews in Williamsburg, there is a stark contrast between the religious families in Çarşamba and the people who promote expressive individualism and public openness in the cafes and galleries of Fener. 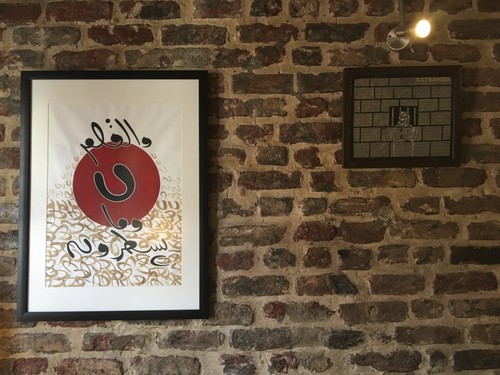 Calligrapher Ahmet Delli frequents the bookstore's cafe, and his works is now exhibited beside anonymous contributions from the revolutionary mosaic artists of Kafranbel, Syria to the second-floor Gallery.

The kindred soul of the Golden Horn in Istanbul and the East River in New York runs even deeper. In the spiritual heartland of the Greek Orthodoxy, the source of all directions to where some 24 million people continue to pray, is Balat, historically the oldest Jewish neighborhood in Istanbul. Its streets are now enlivened with caffeine-addled jet-setters who walk unaware past three distinct synagogues whose foundations have weathered two empires and a modern state. They stand with Balkan names derived from the homelands of the communities who founded them.

Down the street from the first synagogue said to be founded in Istanbul, known by its Macedonian place name, Ahrida, there is another synagogue, uniquely exposed from behind without a stone wall to protect its ramshackle wooden exterior. It was established by the Jews of Istipol, also from modern-day Macedonia. And across from its overgrown and abandoned Hebrew-engraved stone gate, an Albanian-designed cobblestone roadway ascends steeply toward the highest of the seven hills in old Constantinople, to the neighborhood of Edirnekapı.

Around the corner from immaculately preserved 800-year-old Byzantine mosaics and frescos in the museum of Chora Church is Pages Bookstore, a contemporary Syrian-led cultural landmark of world literature that lives and breathes with contemporary art. Its owner and curator, Samer al-Kadri is an internationally exhibiting impressionist himself. He is known to step down the creaking stairs of his three-story bookstore cafe to greet guests with a welcoming smile.

Turks, Syrians and people from across the planet come to Pages to borrow and buy the books that line its shelves, as they peruse its spectacular diversity of literature albeit geared to a mostly Arabic readership. Translations of Amin Maalouf are stacked beside the latest editions of Bright Fingers, the publishing house of children's books by Samer al-Kadri and Gulnar Hajo, who participated in the 8th Istanbul Tanpınar Literature Festival in Istanbul last year. The cafe has become a perennial rendezvous for Syrian artists, writers and musicians who meet every Saturday night for live concerts featuring instrumentation from Istanbul to Aleppo and beyond.

One flight up in the restored classic-style wooden home of old Istanbul, there is a verdant garden behind the cafe serving sweet Syrian coffee. Sometimes spending as much as 11 hours a day, seven days a week enlightening the community space, Kadri is comfortable sharing his perspective on everything from revolution to literature, to art and parenting. During one impromptu conversation with a visitor from Ankara, he lamented how Syria had been bombed by 70 countries. And yet, for him, he expressed unwavering confidence in revolution.

That day, he gifted a young Turkish-American couple the definitive English translation of "The Time Regulation Institute" by Ahmet Hamdi Tanpınar. Before they left, he invited them to see one of his latest paintings in his third-floor studio at Pages, which he was then preparing for an exhibition in Europe. It was an awe-inspiring impression of crimson that swam with the form of a mermaid-like figure, recalling the tragedies experienced by Syrian refugees in the Aegean Sea. Even in dim lighting, the color and character of his work appeared to burst into brilliant flashes from the evening studio where he had worked nights after hosting workshops, readings, concerts and classes well-attended by the local Syrian community.

Calligrapher Ahmet Delli is currently exhibiting two of his works on the second-floor gallery walls at Pages. He frequents the cafe almost every day as one of many cultural fixtures from the growing diaspora who have found a second home in Istanbul. His paintings are light on the eye. They are simple touches of ink and shadow, influenced by the Turkish marbled paper art known as Ebru as well as illuminated Islamic manuscripts. He reimagines the abstract conceptualism of written language under a fine brush. His shapes appear as carefully formed as the enunciation of the sacred, unwritten vowels of the Arabic tongue.

Between the many formal exhibition shows is the grace of the communal interior of Pages, featuring such painters as Houssam Alloum, Ahmad Aldulli, and Saif Al-Taie. The current artworks on display faithfully reinforce the permanent in-house aesthetic of social transformation through such creative movements as postmodernism and neorealism.

The latest examples are two dyed mosaics by an anonymous artist signed Kafranbel after the village in Syria that became world-famous for leading the revolution through satirical cartoons and independent media. Since antiquity, Kafranbel has had a global reputation for its fine mosaics. Its artistic heritage is revitalized in part because of two framed contemporary mosaics over the cafe tables at Pages, one of a mythic celebration of prophetic optimism, as the other evokes the nightmarish dystopia of an imprisoned mother with child.

It is over the sliver of each newly printed leaf where self-education is found and social empowerment earned. It is on a leaf of paper where calligraphers express the silent beauty of visual language. Most importantly, from the leaves of a book in Pages, minds are made and they are changed. And after turning over a new leaf, they will look up and see art.