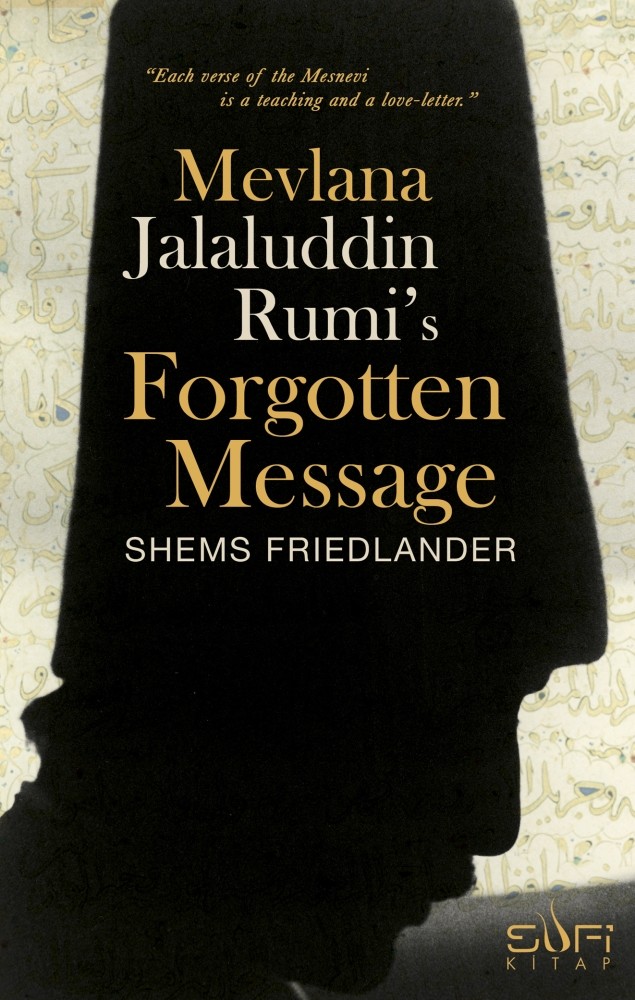 Does the word "Sufism" evoke anything in our minds? Is it one of the "-isms" of our century or kind of a more sophisticated term related to purifying one's own heart from 'earth's glue,' perhaps?"

When it comes to "Sufis" and "Sufism" as mentioned above, which was conceived with Rumi, or Mawlana Jalaluddin Muhammad al-Rumi, who lived in central Anatolia for most of his life until his "wedding night" or "shab-i aruz" in Persian, Rumi is a famous name worldwide. The many names of Rumi are not merely names but rather true realities and inherent discernments of entities used to refer to humankind.

In his most recent work titled, "Mevlana Jalaluddin Rumi's Forgotten Message," published by Sufi Kitap, Shems Friedlander, a well-known professor, visual artist and photographer who, more importantly, is a guided Sufi of the contemporary age, presents the crucial arguments of Rumi, offering insight into his guidance, life, family, companions and, of course, the notion of love that is eviscerated from his true sources and "impeti" which is Islam; as well as the Quran and the life of Prophet Muhammad. Being a long-time explorer of Rumi, Friedlander humbly suggests several interpretations of Rumi's teachings and life, how they are esteemed today and how they should be comprehended.

His review begins with a quotation from Rumi's "Divan-i Kebir," (Grand Canon), a work that is full of manifestations of "divine love." "Reft," ('He is gone,' in Persian) he gently sang when Shams Tabrizi, his blessed and beloved "sohbet-sheikh," had disappeared second time. This "reft" would also be adapted to Rumi's own message in today's world. As a strong message, it has not perished. To the contrary, it stands strong some 800 years later, despite having been forgotten in modern times. As a university professor previously predisposed to spiritually enthusiastic acts, Rumi found his genuine, colloquial "soulmate" when he met Sheikh Shams Tabrizi. Thus, he began to internalize the concepts of divine unity and ecstasy. This concept is not separated from the core teachings of Islam, that is, the Quran and the teachings of the prophet. Rumi is not a "new-age" poet preaching modern-day concepts but instead advocates divine love that encompasses each and every soul. In his "return," a message for "returning to one's essence" is embedded. Now, the main question appears: How do we integrate his teaching into our daily lives? Why do we, as modern beings, suffer from spiritual amnesia that paves the way for a routine devoid of routine and crowded with melancholy? Have we ever tried to fathom what density this brief but extensive "return" involves?

The book offers remarkable arguments on the connection between Rumi and Shams Tabrizi, expressing these in a manner "unlike what is broadly known." First, we see these two masters as "sohbet-sheikhs" rather than having a relationship based on the master and disciple concept. When they met, Rumi was already a sheikh in the Kubrawiyya dervish order. However, Shams Tabrizi carried him to a special place full of love where he experienced unity; later naming his Mathnawi as "The Shop of Unity." Second of all, it is wrong to assume that Shams Tabrizi was killed by a group of jealous disciples including Rumi's son Alauddin Chelebi, for we have no evidence of his assassination. There is no mention of such an issue, as even Rumi himself never mentioned such a possibility. Thirdly, an argument is presented in the inscription on Shams Tabrizi's tomb in Konya province, located in Sharafaddin Mosque and known as a "maqam," meaning a place where his body is not entombed but which is dedicated to his memory.

Another beautiful aspect of the book is the great appendix written for musicians, musical terms and instruments mostly focused on Mawlavi music and written by Nezih Uzel. Indeed, the appendix explains the parts of Mawlawi ceremony, known as the "sema," and mentions what inducements give the core meaning to Mawlawi music, which is related to rhythm rather than melody.

Lastly, in addition to the photography section that is comprised of the photographs Friedlander took in Konya during the "dhikr" (rememberence of Allah) ceremonies, the book is the first to contain a wealth of professional digital content and QR codes which can be viewed with a basic code reader in order to gain access to images ranging from the photographs of the "pirs" to the "sema" ceremonies. With one click, the circumambulation of the Kaaba is within the palm of your hand.

Rumi is tightly coupled with Islam. While one could be a Muslim without being a Sufi, one who wants to be a Sufi must be a Muslim as Friedlander strictly advises. Rumi says, "I am a slave of the Quran while I still have life. I am dust on the path of Muhammad, the Chosen One." Accordingly, he was also a saint who had already solved the very deeper mysteries of human psychology in terms of making his own ascension, for he is equipped and ornamented for close proximity with the Creator. Thus, he left an invaluable inheritance to each of us. "Mevlana Jalaluddin Rumi's Forgotten Message" invites readers and seekers to open their hearts to this universally overarching message, in line with "editing one's own actions" and "reading the book of ourselves," according to Friedlander's naive and clear expression adorned with sweet literary similitudes toward the symbolism that is permeated by Sufism.

Inasmuch as Rumi is a "sheikh," a master for us all, our mission is to solve how to read his message in the form of a love letter.