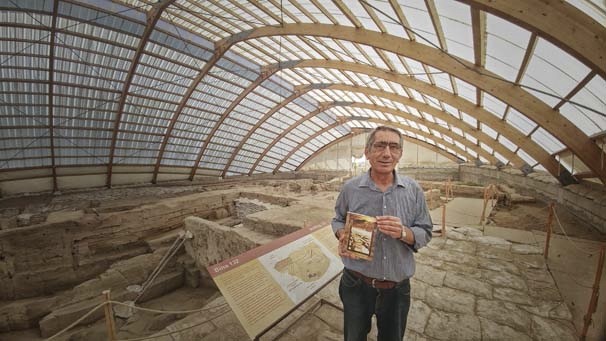 A watchman at archaeological excavations of Çatalhöyük, Sadrettin Dural, who only ever graduated from primary school, wrote a book about the site, which is now used at Binghamton University

The book "Protecting Çatalhöyük," written by Sadrettin Dural, 54, from Konya province about the nearly 9,000-year-old settlement of Çatalhöyük, is used as a supplementary textbook in Binghamton University's Department of Archaeology. After selling his car and taking out a loan, Dural published his second book about Çatalhöyük, where he pastured sheep in his childhood and worked as a warden during the excavation works. 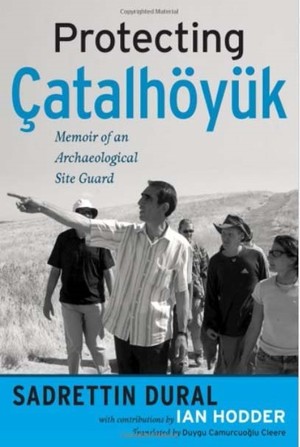 Born and raised in the Küçükköy neighborhood of Çumra district, Dumral, who has a primary-level education, began working as a watchman overseeing the excavation work of the Çatalhöyük archaeological site after having worked as a taxi driver. After completing 52 hours of lessons with the head of excavations, professor Ian Hodder, assisted by a translator, he decided to write a book about the excavation and the Neolithic people from the perspective of a watchman. Dural's book, "Protecting Çatalhöyük," was published in English in Chicago, U.S., nine years ago by Hodder. Academics at Binghamton University studied the book and started to use it as supplementary material in the department of archaeology.

Explaining that he started to avoid people after working as a taxi driver for a while, Dural said he was also planning to live in a desolate place. However, his ideas changed when he started to work at Çatalhöyük. He said that this experience had life-changing impacts on him: "After I started working there, I met people who have never known evil and who illuminated the people around them. I regretted having not finished my education, but I was old, married and had children. For that reason, I didn't have the chance to get educated. Thanks to the people who came to Çatalhöyük, I was inspired to improve myself. These people have contributed tremendously to my improvement, but I couldn't give them anything in return. Therefore, I decided that if I was able to provide information about Çatalhöyük to these people, I would be fulfilling my sense of duty in regard to loyalty. As I gathered information about this site, professor Hodder said that he would teach me about Çatalhöyük, and so I would tell about it consciously. He gave me lessons for 52 hours with his translator in 1997. After receiving those lessons, my perspective on Çatalhöyük changed dramatically. I understood that there is great richness under this place that I pastured sheep in in the past. The saddest part is that we weren't aware of it. In short, I am in love with this place."

Having written a book on what he has learned about Çatalhöyük with the help of the professor, Dural said that visitors who come to the area receive information from excavation officials, but nobody asks him, which he said made him feel insufficient. He added: "My book was published in 2007. I wrote about some parts of my life, the problems I faced during the excavations, the problems and beauty that I have experienced while I was a watchman here. My book is considered a supplementary textbook at Binghamton University, and it is still being sold on world-famous websites." Citing the foreign visitors that come to the area to learn more about him since he wrote the book, Dural expressed his happiness in the moment when they tried to learn from him, addressing him as "professor."

Childhood story of life in Çatalhöyük subject of second book

Explaining his first book couldn't be published in Turkish since the publishing rights belongs to the publishing house, said:"I was faced with some criticism from those around me since my first book is in English. This criticism made me sad. As the book of a watchman at Çatalhöyük will be published and taught as a textbook in the U.S., I didn't think a negative thought with the joy of this news. However, I wrote the second book making references to my own personal life in the wake of this criticism, and I talked about a child who lived in this area. I wrote a story with the knowledge that I learned from the professor."

Dural said that he has applied to the Culture and Tourism Ministry for an incentive that would enable him to publish a second book, which was denied. For this reason, he took out a loan for TL 27,000 ($7,380). Noting the money wasn't enough and he had to sell his car for TL 22,000, to write his book, "9000 Yıl Önce Çatalhöyük'te Yaşam" (Life in Çatalhöyük 9,000 Years Ago).

'How can you write a book?'

Explaining that some people have mocked him, Dural said: "While I was writing my first book, people asked me how I could write a book. Professors can write this book. Nobody will read your book, they said. I even took a break while writing my first book. I was about to give up and stop writing. However, the excavation team reminded me that it is the power of the mind, not a university degree that writes a book. They supported me.

"In my village, locals are not open to the possibility of offering education to girls. I saw this with my older relatives and I thought it would continue like this. However, I sent my daughter and son to school after I met the educated people at Çatalhöyük and, although I am sad to be uneducated myself, my daughter is now a history teacher and my son is a financial adviser. They are my pride and joy," Dural runs a market and a cafe opposite Çatalhöyük now that he is retired as a watchman.

Located on a 35 acres in Çumra, Konya, the Çatalhöyük Neolithic settlement was registered on the UNESCO World Heritage List in 2012. The Çatalhöyük archaeological site was witness to social developments such as the beginning of agriculture along with the adoption of sedentary life. Comprised of 18 layers of Neolithic settlements, Çatalhöyük has wall paintings, reliefs, sculptures and other art that is evidence of social organization and adoption of sedentary life.