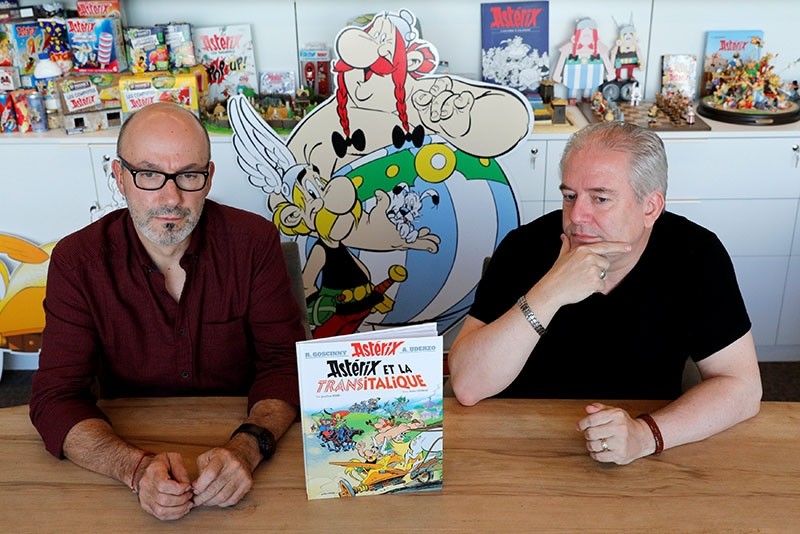 Author Jean-Yves Ferri (L) and illustrator Didier Conrad stand next to a copy of their new comic album ,Asterix et la Transitalique, (Asterix and the Chariot Race) during an interview in Vanves near Paris, France, October 17, 2017. (Reuters Photo)
by Oct 19, 2017 12:00 am

Asterix, the indomitable pint-sized Gaul forever outfoxing the Romans, returns for his 37th comic adventure on Thursday, this time battling his way across Italy in a chariot race.

The mustachioed hero, who has been entertaining readers with his magic-potion exploits alongside Obelix since 1959, has become a mainstay in the publishing industry, with more than 370 million albums sold worldwide.

As well as being translated into more than 100 languages, the books have inspired a dozen movies and cartoon series, making it a global phenomenon.

Rather than a showdown with Julius Caesar, it involves the resolute Gauls meeting a tribe called the Italics who are also fighting to remain independent from Rome.

The original books, written by Rene Goscinny and illustrated by Albert Uderzo, built up a mass following in the 1960s, 70s and 80s, with many childhood readers from those days still snapping up the titles decades on.

After Goscinny's death in 1977, Uderzo wrote and illustrated the series until he retired in 2009. The last three editions have been written by Jean-Yves Ferri and drawn by Didier Conrad, sticking closely to the original format.

"We had Italy in mind and then I had the idea of a chariot race, a sort of rally from ancient times, a trip across the peninsula leading from one city to another," said Ferri as he and Conrad presented the new edition this week.

According to tradition, the latest Asterix features a new villain, Coronavirus, a mysterious, masked chariot racer who will stop at nothing to win.

While Uderzo plays a role overseeing the series, Ferri said he had not asked for any changes.

"He wanted a team able to perpetuate the tradition and he put his trust in us," he said. "He shows his support, but is not really critical.

"The only change we had to make was putting a dot on the 'i' of 'italique'," he joked. "We agreed against our will."

With the Asterix movies proving box office successes, the books have attracted a new, younger generation of followers. That is reflected in the print run for Asterix and the Chariot Race, with five million copies planned.