Meticulously researched and written by Dr. Amer K. Hirmis, "The Economics of Iraq: Ancient past to distant future," released by Grosvenor House Publishing, takes readers 6,000 years back to the early Mesopotamian polity, culture and religious codes that shaped the economy and continue to shape much of the body of Iraq's polity, economy and society today. 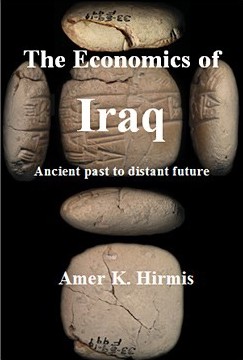 Much of what happens in modern Iraq in its economy, polity, culture and religious codes was shaped by early Mesopotamian culture, religious codes and tradition. Recast to meet the needs of a particular era, Mesopotamian heritage has transcended geography and local cultures.

Economic inefficiency, inequality and lack of sufficient employment are common threads that run throughout Mesopotamian and Iraqi economic history. The persistence of poverty, high unemployment, conscious discrimination against women and a polity dictating blind allegiance and obedience from subjects to the ruler prevented Iraqis from achieving economic development, the ultimate aim of which is the sustained improvement of the well-being of the people. Even when economic growth was attained, it was desperately non-inclusive.

This book examines Iraq's economy over the past 100 years. It establishes historical roots in the consumption patterns, nature of producers, economic structure, trade, monetary and fiscal policy and resource allocation. The echoes from the ancient past in all these areas are striking. The principles of Sumerian taxes are still applied in present-day Iraq.

Indeed, economic thought and ideas as well as polity across the land under Mesopotamian empires shaped politics and economics over the ensuing centuries.

The book proposes a set of conditions that would need to be created for Iraq to achieve economic development and functional democracy in the distant future.