A strait of tomes: In conversation with the Bosphorus Review of Books 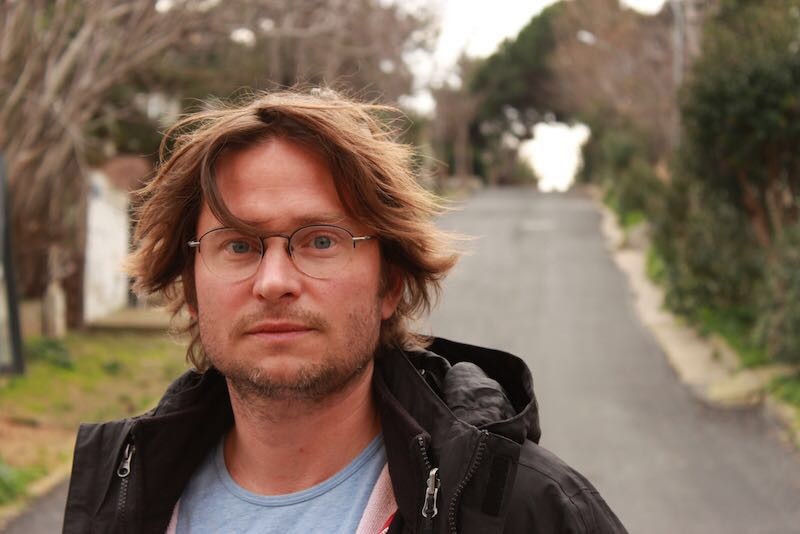 On May 6 at KargaArt, Alexander Dawe, translator (with M. Freely) of Tanpinaru2019s classic Time Regulation Institute will speak at Istanbul International Literature Festival with moderator Luke Frostick, editor-in-chief of the Bosphorus Review of Books.
by Matt Hanson May 05, 2018 12:00 am

The 10th Istanbul International Literature Festival will welcome Luke Frostick, editor-in-chief of the Bosphorus Review of Books, to moderate a discussion with translators Alexander Dawe, Umit Hussein and Zeynep Beler on May 6 at 06.00 p.m. in KargaArt, continuing one of Istanbul's brightest literary conversations

When the Bosphorus Review of Books released its first issue in January 2017 there were no reviews of books. Luke Frostick, its editor-in-chief, remains proud of the short fiction piece he wrote and published to coincide with the launch of the online bimonthly, titled "Müneccim." It is an imaginative character study about a paranoid prince with a bad case of multiple neuroses. The story is set through a dark, orientalist filter, with its crowned Ottoman royalties reclusive behind harem chamber doors, fitted in silvery silk, nervously awaiting subservient eunuchs and fratricidal intrigue in decadently themed palace rooms. Frostick has a sharp eye for historical fantasy, steeped in the former lands and intellectual histories of the late Turkish empire. His writing recalls the work of another young visionary, the artist Görkem Usta, who recently breached the halls of academia with his show of shipwreck models and fez-worn ruffians at last month's Mamut Art Project.

In the first installment of the Bosphorus Review of Books, its co-founder and poetry editor Thomas Parker published, "I'm Sick of Being Blue." It has a musical ring in simple repetitions of a refrain over six, three-line stanzas, evoking that down-and-out, hard-luck soul fished out of his Texan upbringing. He is a self-described "Muslim-American poet" and translator from Arabic and Turkish, broadening the eclectic editorial scope of the Bosphorus Review of Books. It is an expat outfit gaining significance on the Turkish literary horizon. Drawing from his Arabic education at the University of Oklahoma before moving to Alexandria, Egypt, he met Frostick at Spoken Word Istanbul, a weekly night of free expression in the city's downtown core founded by Merve Pehlivan, one of the Review's frequent contributors. Pehlivan wrote its first creative nonfiction piece, "Freedom from Language" about her trials as a Turkish writer who prefers writing in English (she originally wrote the piece in English, only to translate it back into Turkish).

A trio of strait forward writers

"Part of starting the Bosphorus Review of Books came out of my personal frustration with getting published. Also because there was a massive gap in the market. There wasn't anyone except Cornucopia and William Armstrong [a journalist at Hurriyet Daily News] writing about Turkish literature," said Frostick, surrounded by multilingual books and English speech at the Cihangir cafe Journey, a haunt for expats, while awaiting his colleagues for a roundtable discussion and editorial meeting. "Because we're a small team we generally can give pretty detailed feedback. This is a good time to write about Turkish literature. There's so much coming out now that just wasn't available before. If you go into a Turkish bookshop there are shelves and shelves of Faik books and in English there is one. Ahmet Hamdi Tanpınar, the god of Turkish literature, wrote many important books and only two are out in English." 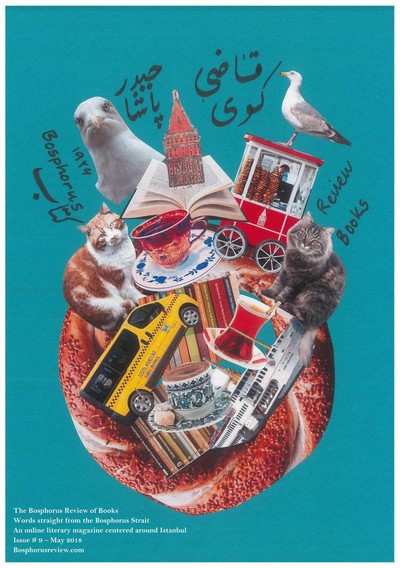 The current cover for the May 2018 issue of the Bosphorus Review of Books was created by artist Mandana.

By the Review's second issue, there were book reviews, interviews and more women writing for the modest publication that overwhelmed its fledgling editors as they watched it balloon from idea to establishment practically overnight. It was then in March when Parker published his first poetry translation for the Review, from the 9th century Arabic of Qais Ibn Al-Mullawah, better known as Majnoon, lover of Layla, the Shakespearian Juliet of the Arab world. He claimed to have chosen lines that had never been translated into English, and under his careful handling of the otherworldly culture, his fine literary craft has a fresh, piercing readability.

It was not until the fourth, July issue, when Parker published two translations of Turkish poems, one with the poet Gözde Kurt, whose piece, "Envision" has a disarming, enlightening beauty, and appears in both languages in the Review.

"I'm a better Arabic translator, but most of my poetry translations at the Review have been from Turkish. In the last year, we expanded at a surprising rate. A lot of our first contributors came from Spoken Word Istanbul. Our unifying factors are, firstly, the willingness to accept published and unpublished writers, it's really about the quality of the work. Secondly, we have a focus on Turkey. It's an interaction between Turkish literature and global literature," said Parker, who is thrilled by the publication of his most recent translation of the creative nonfiction of Malek Daghestani in the current edition of the Review, on Syria's secret prison theatre. "We are the only, or at least the biggest English-language literary magazine in Istanbul. If that's true, it's hard to have a very specific focus. I take submissions in Turkish and Arabic. I think it's interesting for Turks to read about how foreigners appreciate Turkish literature." 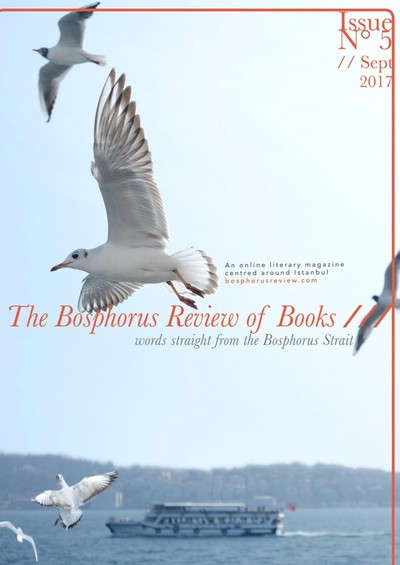 The cover art for the September 2017 issue of the Bosphorus Review of Books (BRB) created by Zeynep Beler.

Since taking off in style, the Review has delighted readers with a series of prominent interview subjects, in the latest issue with the Turkish novelist Burhan Sönmez (whose novel, "Istanbul Istanbul" is translated by Umit Hussein), and original cover art designs. Zeynep Beler, for example, speaking at the translation panel that Frostick is set to moderate on May 6 for the 10th Istanbul International Literature Festival, created the September 2017 cover. The startling, photographic clarity of its focus redefines stereotypes of the seagull-driven Bosporus seascape. By the third issue in May, the Californian litterateur Erica Eller became nonfiction editor. She approached Frostick and Parker after a Yabangee.com Expat Spotlight on Writing at Bomontiada's Atölye.

"We're all emerging writers. We [as a journal] are really lucky because we have a very specific niche, and it's an area that needs to be exposed more in the wider literary world," said Eller, who is currently collaborating with the Hazel Reading Series, which she initially founded while living in San Francisco, to develop the Bosphorus Review of Books through joint ventures. "I've also been interested in the region, and in world literature. Thomas speaks Arabic, and interacts with the Syrian community. I know that Georgia has a wealth of literature, although we haven't had anyone review that yet. The most commonly learned second-language in Turkey is English. Readers are fascinated by English literature."

Eller first contributed to the Bosphorus Review of Books with her review of "Kafka's Curse" by the South African novelist Achmat Dangor, noting that her experience with the book changed dramatically after reading it initially in San Francisco compared to in Istanbul. In the past year, she says the Review has prompted her to write better, and more importantly, it has given her a platform through which to continue her literary practice, to branch out beyond academic study. She is only truly satisfied with each new piece that she last completed, emphasizing her focus on constant progress as a literary craftswoman. In contrast, Frostick remains steadfast in defense of his debut piece of short fiction at the Review.

"I enjoy engaging with texts from an analytical perspective. We don't receive a lot of book review submissions, so I'm often handpicking specific authors to write them. You can access a lot of English texts in the academic world, whereas in the world of Turkish literature, a text begins in Turkish and later on you get it in English well after that author's work is established," says Eller, who holds two MA degrees, one in literature and the other in creative writing. "Not all of the pieces are on Turkey, but that does give us a certain character. Most of our cover art has also been about the region. We want to attract people who feel intimidated to submit work. If they are not native English speakers we [still] want them to submit to us because that is the [local] voice of the region. Opening up English into literature broadens the way the language is learned. We foster a greater appreciation for the wider realm of English outside of strict professional use."

"I was a fellow [at the Istanbul International Literature Festival] last year. This is the first event that I've hosted. I'm excited and nervous. Alexander Dawe is a legend, equal to Maureen Freely and Amy Spangler. Last week, I met with the head of Bosphorus University's translation department to discuss the best questions. Dawe and Beler both translated Hakan Günday and Ece Temelkuran," said Frostick, who declared his love for the novel "Istanbul Istanbul" to its author Burhan Sönmez for the latest, May issue of the Review after reading its translation by Umit Hussein, one of his upcoming panelists. "We have a name now. When we ask for an interview, people say yes. We are currently working on an anthology of last year, with some of the better pieces that we published. We're just waiting for the translation to be finished. We have an agreement with Matbuat Publishing for a mirrored bilingual version in Turkish and English."