Yaşar Kemal, the voice of authenticity in Turkish literature 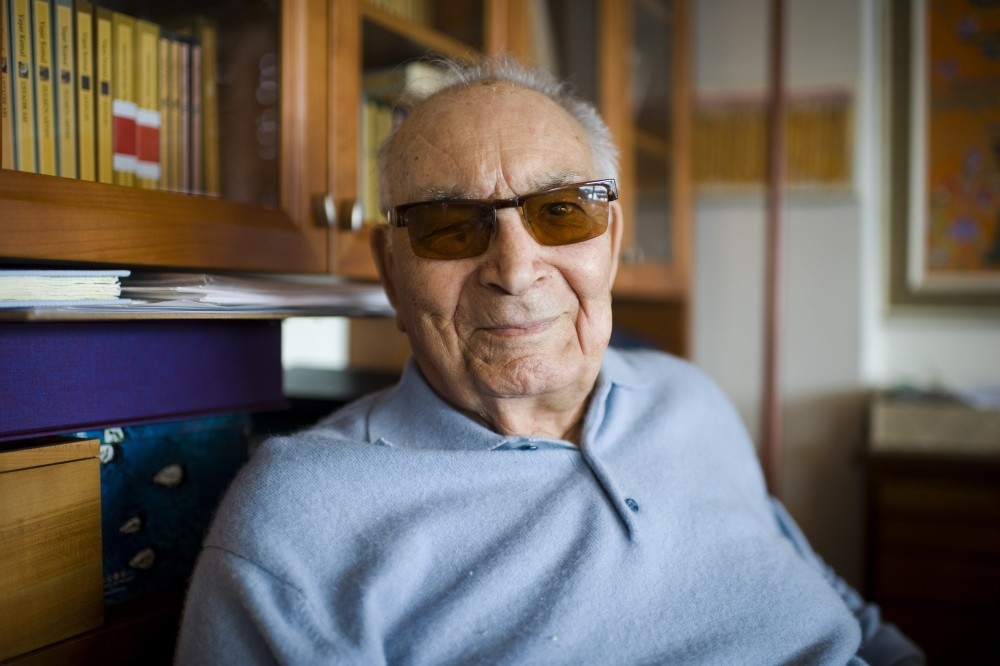 Yau015far Kemal was a master novelist different from others thanks to his outspoken advocacy on behalf of the marginalized.
by Luke Frostick
Sep 28, 2018 12:00 am

In all of Turkish literature including the beautiful Istanbul paintings by writers like Pamuk and Tanpınar, the brief but elegant works of Sabahattin Ali and Sait Faik Abasıyanık and new writers like Burhan Sönmez and Ece Temelkuran, who are rising to international fame, the one I keep coming back to, the one I've read most is Yaşar Kemal.

The first book of his that I encountered was not "Memed, My Hawk," as I think it is for most people, but it was one of his later books, a very slight novella called "The Birds Have Also Gone."

It details a few weeks in the life of a group of street boys camped out on the Florya Plain trying to catch birds. The birds are intended for 'flying and being free,' an Istanbul ritual shared by all the religious denominations of the city where worshipers buy and release one of the delicate birds with the hope that their prayers are carried to heaven. However, the tradition is declining and the street boys find it harder and harder to make ends meet selling the birds. I was struck by the skill of the writer, that by using the boys' experience, he was able to create a metaphor for his feeling for the city and the time as a whole. A grim vision of modernity and a society that, in the eyes of the writer, was losing touch with its heritage and falling apart as a consequence. It was a vision as beautiful as it was heartbreaking. Of course, these days not only the birds but the plain itself has also gone.

I was hooked. The next I read was the classic, his first book, the legendary "Memed, My Hawk." Within the pages, I found a completely different work. Where "The Birds Have Also Gone" was fatalistic, elegant, and polished, "Memed, My Hawk" was optimistic, filled with bombast, and chaotic. For all the differences, they were both profound. They could have been written by different men, but also they both reflected the major themes of Kemal's work, the marginalized changes in society as experienced by those at the very bottom and the diversity that is at the very heart of Turkey. Moreover, many of the most famous writers in Turkey are very Istanbul-centric. While there is nothing wrong with that, it does mean that a large proportion of the Turkish population including its minority groups are underrepresented in literature, or are depicted by Istanbul writers sallying forth to write about Anatolia, to capture it, bottle it up and bring it back to the city. Some of these books, like Pamuk's "Snow," are fantastic but they lack the authenticity of voice that comes from Yaşar Kemal. In other words, he depicts the people of Anatolia warts and all, showing them in all their nobility, superstition, ignorance and intelligence without ever being condescending. He is also a master of showing the same people when they come to Istanbul and their way of life butts up against the city. It was exhilarating to get that point of view.

Yaşar Kemal was a man who seemed to have an instinctive understanding of character and storytelling. Although "Memed, My Hawk," from a structural point of view, is quite disorganized and the plot itself a bit predictable, the story has the timeless quality found in mythology or folk tales. That's no accident because it is from the songs and storytelling forms of Anatolia from which Yaşar Kemal drew his inspiration. He would get better at the structural side of writing as he practiced his craft. If you look at, for example, "They Burn Thistles" (the follow up to"Memed My Hawk"), you can see a much more sophisticated novel but still retaining the tone, feelings and characterizations of the traditional forms.

I'm not usually the kind of reader that worries too much about the lives of the writers I read. It can be interesting, but more often than not, I like the books to speak for themselves. However, when it came to the first few Yaşar Kemal novels I read, it seemed to me that the journey of a man from "Memed, My Hawk" to "The Birds Have Also Gone" must have been a profound one. I wasn't wrong. Yaşar Kemal had a life as storied as any of his protagonists.

From a very young age, he had a hard and sometimes violent life. His uncle was a notorious bandit and his father was murdered in front of him. He went to school and became a letter writer for the local peasants, his first job in writing. From there he moved into journalism and then into writing fiction. As a journalist and a political activist, he wasn't afraid of challenging the status quo, he joined then fell out with leftist groups and was convicted for his writing twice.

He was a man who lived and wrote about injustice and decried foolish greed for its destructive effects. These messages have as much resonance today as they did in his day or in the days of the wandering Turkish folk tellers that Yaşar himself was inspired by. That is before we even get started on his stance on minority rights within Turkey. Coming from a Kurdish family himself, he understood firsthand how hard it could be to live as a member of the minority in a country.

By the end of his life he was an established member of the Istanbul literary elite. He missed out on the honor of becoming Turkey's first Nobel prize winner but racked up awards aplenty both in outside of Turkey. He died at the age of 91 as a legend.

I still don't feel I understand Yaşar Kemal, he came from a period in Turkish history that, although there are consistencies, is wildly different from the country I see before me. I would like to know more about him and the world that formed him. That is why I'm very excited about a new documentary "Yaşar Kemal Efsanesi" ("The Legend of Yaşar Kemal") by Aydın Orak. A movie that details the writer's life using archive footage, interviews with people who knew him and the man himself to build up a portrait of this most important of writers. Over the summer, it was screened in various cinemas in Istanbul, but without subtitles. Thus, if you are like me and not great at Turkish, then it is quite difficult to understand. However, I believe that the life of Yaşar Kemal is worth exploring. So, in my capacity as the editor of The Bosphorus Review of Books, I have teamed up with Spoken Word Istanbul and Cine Majestic to put on a screening of the movie with the English subtitles included. Yaşar Kemal has an international following and has been translated into numerous languages, so we think it is only fair to let Yaşar Kemal fans of all nationalities enjoy this film. We will be joined by some of the people who were responsible for the movie and will do a Q&A after the show. Come along. If you are a fan of Kemal like me, then it will be a treat, if not it is still an glimpse into the life of a man who lived through an interesting period and was determined to make the most out of the time he was allotted on this planet.