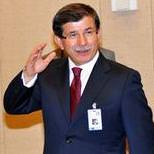 Turkish Foreign Minister Ahmet Davutoglu was expected in Kuwait on Sunday to attend a meeting aimed at strengthening ties with the Gulf Cooperation Council (GCC).

Kuwait City - Before traveling to attend the meeting, GCC Secretary General Abdel-Rahman al-Attiya said from the council headquarters in Riyadh that the two sides would discuss coordination on regional issues, particularly the Middle East peace process.

A day earlier, al-Attiya had described Israel's recent decision to issue permits for 238 new housing units in East Jerusalem - which Palestinians have long eyed as a capital for a future state - as aggressive and provocative.

For its part, Turkey has had a tense relationship with Israel ever since Israeli forces killed nine Turkish citizens aboard a ship that was attempting to break the blockade on the Gaza Strip in May.

Turkey and the GCC are also expected to tackle economic issues.

The GCC, which represents a political and economic union of six Gulf countries, signed a joint economic cooperation agreement with Turkey in 2005.

Turkey then became the first country outside the Gulf to be given the status of strategic partner of the GCC two years ago.

Both sides have expressed interest in enhancing trade, as well as cultural and educational cooperation.

The GCC and Turkey are also focused on boosting tourism. There has been a rise in tourism to Turkey from the Arab world, which experts attribute to the popularity of Turkish soap operas in the Gulf. The shows, which are dubbed in Arabic, play to Muslim sensitivities.