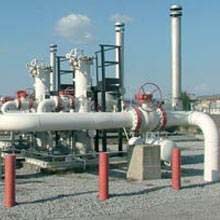 Russian gas giant Gazprom on Monday announced it had boosted the supply of natural gas via Turkey to 42 million cubic metres per day as Iran temporarily cut off supplies to carry out repairs.

MOSCOW, Russia, Oct 18, 2010 (AFP) - "Due to a temporary cutoff of supplies of gas from Iran to Turkey for technical reasons, (Turkish state energy) company Botas asked Gazprom to increase gas supplies on the Blue Stream pipeline until repairs are completed," the company's press service said in a statement.
Botas asked for 42 million cubic meters of gas to be sent on Monday, after asking for supplies to be increased on Sunday from 32 to 40 million cubic metres, the company said.
The Blue Stream pipeline directly links Russia and Turkey under the Black Sea. Gazprom earlier agreed to boost gas supplies to Turkey following two separate blasts in July and August in the Turkish section of the gas pipeline between Turkey and Iran. Turkey blamed separatist Kurdish rebels for both of the blasts.
Iran supplies Turkey with between 15 and 18 million cubic metres (between 525 and 630 million cubic feet) of gas a day through a pipeline that runs from the northwestern Iranian city of Tabriz to Ankara.
Turkey also imports natural gas via pipelines from Russia and Azerbaijan.
Last Update: Oct 19, 2010 12:06 pm
RELATED TOPICS