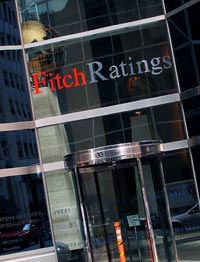 Fitch rates Turkey one notch below investment grade and the revision signals strong growth and ambitious plans to cut the budget deficit and debt could finally put Ankara within sight of an investment grade rating, seen by markets as long overdue.

"Turkey's improving public finances are increasing confidence in its sovereign creditworthiness... debt dynamics are favorable, helped by strong GDP growth and a marked decline in interest rates," Fitch said in a statement.

"The government is lengthening the maturity of its debt, thereby reducing market risk; while financing is supported by a deep local market, as well as strong current capital inflows," it added.

Fitch expects Turkey to grow 8 percent this year, above a government forecast for growth of 6.8 percent.

Markets welcomed the news. The Turkish currency firmed to 1.4795 against the dollar on the interbank market from 1.4840 prior to the announcement, while the main share index rose 0.66 percent to 66,771 points, having fallen earlier in the day.

Fitch warned, however, that Turkey has a record of high and volatile inflation and that its external finances are deteriorating, making it vulnerable to abrupt shifts in global liquidity.

"The quality of financing has deteriorated with an increasing proportion coming from short-term and portfolio debt inflows. These trends are worsening the external liquidity position and expose the country to an abrupt shift in global liquidity," Fitch said.

Turkey's government hopes to win a third term in power in elections next June. Should it win and succeed in reducing the public debt-to-GDP ratio, Fitch said that could lead to an upgrade, as could coming through the elections with no increase in political instability.