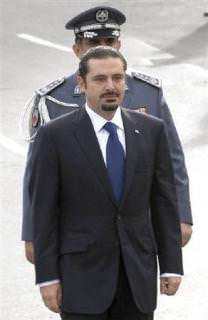 Lebanon’s Prime Minister Saad Hariri said Thursday he hoped to expand a new free trade agreement with Turkey, Syria and Jordan across the Arab world, as Ankara’s premier wrapped up a visit to Beirut.

"We aspire to expand (these steps) to more Arab states," Hariri said at a conference organised by the Union of Arab Banks in the Lebanese capital.
"We hope that the free trade zone will be an introduction to the liberalisation of trade services between Lebanon and Turkey," he added.
Turkish Prime Minister Recep Tayyip Erdogan on Thursday is set to end a two-day official visit to Lebanon with a trip to the country's south.
His visit comes at a time when Lebanon is wrought with tension and Ankara seeks to emerge as a central mediator in the Middle East.
Hariri and Erdogan signed the trade agreement Wednesday, sealing a pact reached earlier this year on a free trade zone that would encompass Lebanon, Turkey, Jordan and Syria.
The two premiers also agreed to the progressive elimination of tariffs from the import and export of industrial products between Lebanon and Turkey.
Erdogan's visit comes as Hariri is locked in a standoff with Hezbollah over a UN-backed court probing the 2005 murder of his father, ex-premier Rafiq Hariri.
The Special Tribunal for Lebanon is expected to implicate Hezbollah operatives in assassination, a move the militant group's leader Hassan Nasrallah has warned against.
Lebanon imports some 350 million dollars (262.8 million euros) worth of goods from Turkey annually, mainly dried foods and grains, and exports approximately 100 million dollars (75 million euros) worth of goods to Ankara, mainly scrap metals and raw goods.