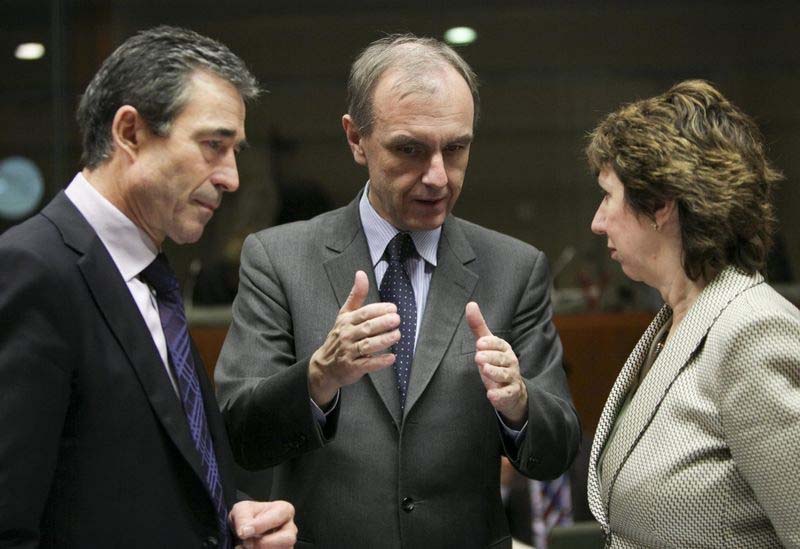 European Union defence chiefs pushed Thursday for deeper cooperation to maintain their military might in the face of shrinking budgets across the austerity-driven 27-nation bloc.

Faced with dwindling resources, ministers stressed the need to give "new impetus" to military collaboration in order to "safeguard the defence capabilities required" to support the EU's common security policy.

They also backed a German-Swedish initiative urging partners to identify tasks that could be shared -- from air transport to training facilities -- to ensure that Europe maintains its "ability to act credibly in crises."

The defence chiefs encouraged EU states to review their military capabilities in order to identify by early next year areas of potential cooperation.

France and Britain set an example last month by sweeping aside their historic rivalry and striking a landmark deal to share the use of aircraft carriers and nuclear testing facilities.

Agreements such as the British-French treaty "promise to contribute to improving European defence capabilities," the EU ministers said in conclusions.

The defence ministers asked the European Defence Agency, set up to support military coordination, to intensify efforts to find assets that militaries can pool together and share.

But the agency's own tiny budget was frozen at 30.5 million euros after Britain -- already leading a campaing to limit an increase of the EU budget -- objected to a 1.2 million increase.

"When we are having to cut capabilities and reduce service personnel at home, it is important that we can take similarly tough decisions at the European level," said British junior defence minister Gerald Howarth.

French Defence Minister Alain Juppe said his country had backed an increase but understood the British position when governments are cutting budgets throughout Europe.

"France wanted something more ambitious but we rallied behind this compromise which was voted for unanimously," he told reporters after the meeting, adding that the agency would still be able to function.

The German-Swedish paper said European governments should decide which capabilities will remain strictly sovereign, noting that combat forces, fighter planes, warships, and intelligence could fit in that category.

Areas that could be pooled include training forces, strategic airlifts and logistics capabilities, the document says.

Finally, governments should identify tasks they could share such as aerial and maritime surveillance as well as training and exercises, it says.

The EU defence chiefs also discussed their bid to forge more meaningful ties with the NATO military alliance, a goal that has been stuck over age-old divisions between NATO member Turkey and EU state Cyprus.

NATO Secretary General Anders Fogh Rasmussen called on EU defence ministers to conclude an arrangement between Turkey and the EDA, and in return Ankara would have to recognise that all EU members participate in EU-NATO cooperation.