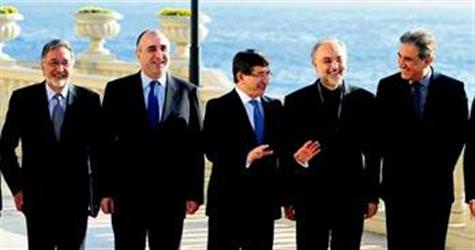 Plagued by conflict but blessed with vast oil and gas reserves, the Eurasia region has seen its geopolitical significance increase.

The summit of the 10-member Economic Cooperation Organization (ECO) is expected to produce few concrete results, but its significance lies in the attendance of some of the region's high-profile political leaders.

The meeting, which will be attended by Iran's President Mahmoud Ahmadinejad, demonstrates Turkey's ability to network in a region where world powers struggle for trust.

Ahmadinejad, who held one-to-one talks with Turkish Prime Minister Tayyip Erdogan late on Wednesday, is in Turkey a month before planned nuclear talks with six major powers in Istanbul.

Turkey, a rising Muslim democracy that has applied to join the European Union, has cultivated its eastern neighbors to consolidate its position as a link between Europe on the one hand and the Middle East and Central Asia.

Turkey will use it to showcase its growing diplomatic assertiveness and project a foreign policy it defines as having "zero problems with neighbors."

Tension is high between Islamabad and Tehran after a mosque bombing in Iran, but Ahmadinejad will be joined at the ECO summit by Pakistani President Asif Ali Zardari.

President Hamid Karzai of Aghanistan, which is fighting al Qaeda and Taliban militants, will also attend.

"Turkey is providing a model for these countries in the region, many of which are going nowhere in terms of social peace and economic prosperity," said Semih Idiz, a Turkish foreign analyst for the newspaper Milliyet.

In the past decade, Turkey has transformed itself from a financial basket case on the periphery of Europe into one of the world's best-performing economies which now stakes a claim to a regional leadership role.

The summit will be held at an Ottoman palace on the European shore of the Bosphorus, overlooking the Asian side.

In a preparatory meeting of foreign ministers on Friday, Turkey's Foreign Minister Ahmet Davutoglu said Turkey's "Eurasian vision" was one of close regional ties and cooperation.

"Our objective is to strengthen the links between Europe and Asia through energy and transportation corridors and by creating new dynamics for cooperation," he said.

Henri Barkey, a Turkey expert at the Carnegie Endowment for International Peace in Washington, said Turkey saw itself as a global player and was using ECO summits to demonstrate its influence.

"Most of these countries in ECO are mired in domestic problems and Turkey's interest are far more global. Turkey does not need ECO, but Turkey does not loose an opportunity to show it's central to world politics," Barkey said.

U.S. and Western allies have praised Turkey's role in exporting democracy and economic prosperity in the region, but some allies are concerned the Muslim NATO member might be undermining international efforts to isolate Iran.

The big powers want Iran to halt its uranium enrichment programme, which they suspect is a cover for an effort to build a nuclear arsenal. Iran says it has the right to enrich uranium for civilian use and does not want atomic weapons.

Turkey says it does not want nuclear weapons in the region and the solution to the dispute should be diplomatic.