Northern Cyprus Airlines to be up and running again 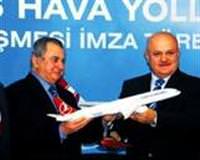 An agreement has been signed for a new airline company to be established in Northern Cyprus after the former Cyprus Turkish Airlines (KTHY) was forced to cancel flights due to the financial crisis.

The ownership of the new airline, named Northern Cyprus Airlines, is as follows; 60 percent belongs to Northern Cypriot businessmen, 30 percent to the Northern Cypriot state and 10 percent to Turkish Airlines. With a 20 million TL capital, the new airline is the first company to be formed within the public-private sector of the Turkish Republic of Northern Cyprus.
The airline company, which will be based in Istanbul, will operate both passenger and cargo transportation and intends to begin flights in March.
THY Chairman of the Board Hamdi Topçu states, "We will be working tightly on this," and expresses that the objective for the company established is to make profit. Topçu also stated that Turkish Airlines' intentions are to provide a connection between Turkish Cypriots and the world.