Sanctions no obstacle as Iranians get their iPads 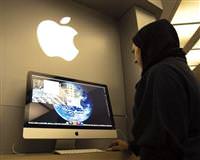 Although there were no lines of eager customers forming outside computer stores in Tehran on the day that Apple's iPad was introduced to the world last year, the tablet computer -- the newest global must-have gadget -- has quietly appeared in Iranian shops, despite tightened sanctions.

On a recent winter's evening, the swank Paitakht Computer Center in northern Tehran was packed with young, technology-savvy Iranians looking for the latest digital products for work or fun.

And products made by Apple (AAPL.O) -- the technology giant from a country that Iran labels as the "Great Satan" and that has led the drive to isolate Iran economically - were attracting more shoppers than anything else in the multistory electronics emporium.

"It's so amazing that you can find the latest American-made high-tech products with a cheap price in a country under heavy U.S. sanctions," said Mahnoush Tavakkoli, one of the shoppers. Tavakkoli, 36, had just purchased an iPad.

In Tehran, the price of an iPad ranges from $680 to $1,100, depending on the model. The minimum retail price for the latest iPhone 4 is $880. Those prices are similar to what shoppers would pay for similar goods in Britain, for example.

Washington imposed a ban on most trade between the United States and Iran as long ago as 1979, after the storming of the U.S. Embassy in Tehran and the ensuing hostage drama.

U.S. companies were barred from dealing with Iran, particularly in oil and gas projects. Goods or services from Iran, except for certain foodstuffs and carpets, cannot be imported into the United States.

Since 2006, Iran has come under tighter economic and financial sanctions, imposed by the U.N. Security Council and intended to curb a nuclear program that some countries maintain is being used to develop atomic weapons, a charge that Iran denies.

Washington and its European allies have followed up the U.N. sanctions with their own measures aimed at making it more difficult for Iran to gain access to international banking services and hampering outside investments in its vital oil and gas sectors.

But all this has not stopped U.S.-branded goods from making their way into the Iranian market.

"Global sanctions might have brought more limitations for Iranian traders, but they have learned how to meet their needs," said Bahman, a shop owner selling Apple products who asked that his surname not be used.

Imported goods in Iran come mainly from Europe or Asia. Still, in the digital field, it is relatively easy to find a product made in the United States or under the license of a U.S. company.

"We had iPad in Tehran less than a month after it hit the global market," Bahman said. "It was the same for other American brands like Dell, Hewlett-Packard, BlackBerry or Motorola."

Like Apple's iPhones, BlackBerry smartphones, made by the Canadian company Research In Motion (RIM.TO), act as platforms for a range of applications that cannot be obtained via Iran's tightly controlled telecommunications networks. This limitation on their functionality, however, has not reduced their appeal to fashion-conscious Iranians seeking a high-tech status symbol.

"People in Iran have a desire to move along with the world in using the latest electronic products -- even if some of their new features do not work here," Bahman said.

Some features of new digital products -- such as TweetDeck in iPad for users of the Twitter social network, or Kindle, which allows users to download e-books from the online retailer Amazon -- do not work in Iran because of poor and restricted Internet and telecommunication connectivity.

While U.S. officials assert that it is sanctions that are responsible for hampering the development of Iran's nuclear program, the situation is different in the personal technology sector.

Retailers and consumers say that if anything is going to slow the trade in electronic gadgets, it will not be sanctions but rather Iranians' reduced spending power. And the blame for that, they say, rests with domestic economic policies and not international steps against Iran.

The government started to cut back fuel and food subsidies in December, aiming to save the state up to $100 billion a year and to make Iran less vulnerable to any sanctions on fuel imports.

As the cost of essential goods rises, some Iranians fear that they will no longer be able to splash out on luxuries -- especially if inflation, currently around 10 percent, soars, as some economists predict.

"Sometimes I think we have more been suffering from our own economic mismanagement than the imposed sanctions," said a university professor in Tehran who asked not to be identified because of the government's reputation for reacting harshly to criticism.

"My children love digital gadgets, and I used to buy them for them," he said. "But as the living costs are sharply rising, I should take more care about our basic needs."

Molaie, a manager of a company importing computer and network equipment, who also did not want his full name used, said that imports would continue as long as there was market demand. "It is just the matter of people's purchasing power."

"We had no major obstacle so far in our businesses," he added. "I have no idea about the government's difficulties."

Much of the trade in sanctions-busting goods comes through the United Arab Emirates and more particularly Dubai, which faces Iran across the Gulf. Both legal shipments and smuggled goods regularly cross the intervening stretch of water, which is only 54 kilometers, or 29 miles, at its narrowest point at the Strait of Hormuz.

Dubai's close economic ties with Iran have attracted scrutiny from Washington. In response to that, the UAE signaled last year that it would rein back its longstanding role as a trading and financial lifeline.

In June, the UAE's central bank, in a measure that could spell disaster for many Iranian banks and businesses that deal with Dubai, told financial institutions to freeze accounts belonging to dozens of firms and blacklisted dozens of entities.

As a consequence, said Mojtaba Esfehanian, a manager of a computer company in Tehran, many Iranian companies based in Dubai had started to think of moving elsewhere.

The 41-year-old manager said Turkey and Malaysia, with their large Muslim populations, could act like bridges connecting Iran to the markets in the West and the East.

As the UAE pulls back from its traditional relationship, "our neighbor Turkey seems more attractive for Iranians," Esfehanian said.

Iran's ambassador to Turkey, Bahman Huseyinpur, recently visited Turkey's Black Sea coast as part of a fact-finding mission to assess the port facilities available there. The reason: Tehran wanted "to transfer a large portion of our trade from the Gulf" to Turkey, he said.