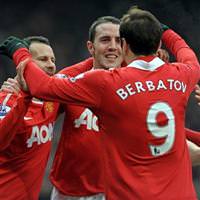 Premier League leaders Manchester United said on Sunday they were not for sale after the Sunday Times reported that Qatar Holding had held talks about a 1.5-billion-pound takeover.

"There has been no approach of any kind to buy the club and one wouldn't be welcome anyway because it is not for sale," a spokesman said, adding that the newspaper story was wrong.

The Sunday Times reported that the Glazer family, the unpopular American owners of the Premier League club, had held talks with a group, believed to be Qatar Holding.

The report said the talks had floundered because the Glazers valued the Old Trafford club at closer to 2 billion pounds.

The Glazers bought Manchester United, one of the most famous soccer clubs in the world, in 2005 for some 790 million pounds against a wave of protest from fans who feared they would load it up with debt.

No one from Qatar Holding was immediately available to comment.