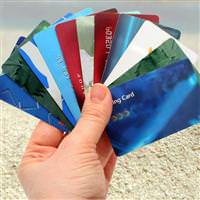 In comparison to 2009, there was an 11 percent increase in the number of transactions and a 15 percent increase in revenue states Özinal, who also revealed that 21 million people in Turkey use credit cards. Expressing that for 2011, they expect an increase in revenue at around 15 percent, Özinal went on to state, "The payment system has made us accustomed to this increase. A smaller target would not be satisfying. We have very good infrastructure in place in terms of veering towards cash revenue payment systems."

WE TOOK ADVANTAGE OF PAYMENT INSTALLMENT PLANS
According to data released by the Interbanking Card Center, 23 percent of spending done on credit cards was part of a payment installment plan. Overall, there was a 24 percent increase seen in installment payment plans in comparison to figures from 2009.
FATHER'S DAY COMES IN FIRST
Father's Day was the number one day in terms of holiday credit card use. With a 19 percent increase compared to 2009, money spent using credit cards on Father's Day reached 714 million liras. Mother's Day came in second with 682 million liras spent. The average prices spent on the top three holidays are as follows, Father's Day 92 liras, Mother's Day 88 liras and Valentine's Day at 86 liras.
FIFTY PERCENT INCREASE IN E-TRADE
Last year, 15 billion; 225 million liras were spent by foreign and domestic credit cards on e-trade sites, totaling 91 million transactions. In comparison of e-trade figures from 2009 and 2010, facts show a 50 percent increase.
FRAUD DOWN BY EIGHTY PERCENT
Reminding of Turkey's switch to passwords three years ago, Özinal emphasized the 80 percent drop in incidents of fraud, a figure which highly surpassed expectations. Özinal went on to state that since Turkey has adopted the password system, incidents of fraud have predominantly veered towards nations that do not use passwords.