Visa regulations to be lifted with Ukraine 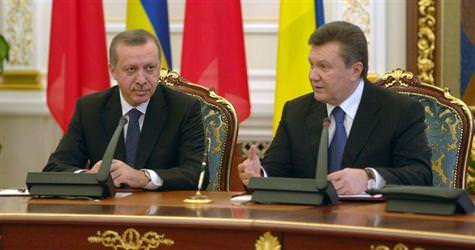 Prime Minister Erdoğan has announced that visa regulations will soon be lifted with Ukraine. The agreement on eradicating joint visa regulations is expected to go into effect this year. If so, Ukraine will become the 56th country to not require visas for Turks.

Meeting with Ukraine President Viktor Yanukovych, Prime Minister Recep Tayyip Erdoğan announced that they have reached an agreement regarding lifting visa regulations between the two countries. Noting that they have ordered for the arrangement and the Readmission agreement to be signed as soon as possible, Erdoğan stated that upon the Assembly's approval, they plan to implement the joint decision to lift mutual visa regulations as soon as possible.
Prime Minister Erdoğan also stated plans to complete the free trade agreement by the end of the year. Pointing attention to the fact that 600 businessmen accompanied the Premier on his trip to Ukraine, which is set to host the 2012 European Football Championship, Erdoğan stated, "In 2012, there will be a European Football Championship. The timeframe is approaching and the Turkish construction sector is now second in the world following China. We would like Turkish contractors to take part in the tenders held."

TARGET IS RAISED
Ukrainian State leader Yanukovych expressed intentions to increase the trade volume between the two nations to ten billion dollars in five years' time and stated, "In ten years, we would like this figure to reach 20 billion dollars."Prime Minister Erdoğan found Yanukovych's target to be too little and stated that the trade volume target in five years' time should be 20 billion dollars. "Both sides have this power. We are two important countries in Europe. Let's just make sure that we are determined."

Come, our door is open…
During the Ukraine Business Council and Business Forum held in Kiev on Tuesday, Prime Minister Erdoğan invited Ukrainian investors to invest in Turkey. Saying, "Investors should mix, and get to know each other," states Erdoğan, who also pointed out the possibility of joint investments in third world countries. During the meeting, Erdoğan delivered the following message; "our door is open, we are willing to facilitate in any way."
Expressing their interest in the national combat tank project, Ukrainian President Yanukovych also drew attention to the fact that the Turkish satellite to be launched into space in February, will be done so with a Ukrainian make rocket.

Tours to drop to 340 Euros
Every year, approximately 6,000 to 7,000 people visit Ukraine as tourists. According to Jolly Tur International Tour Manager Tolga Tekin, tours that are priced at 400 Euros will go down due to the lifting of the 60 euro visa and service costs. Tekin states; "Countries that lift visa regulations immediately become appealing. There will be a serious increase in demand for the region the moment visa regulations are lifted."