Turkey’s population on the rise 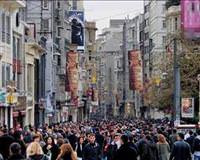 The Turkish Statistical Institute (TÜİK) has announced the 2010 population results taken from the 'Address Based Population Registration System'.