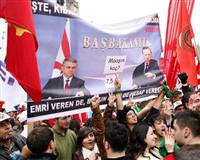 Thousands of Turkish Cypriots walked off the job and protested peacefully on Friday against austerity measures in northern Cyprus which they said could force mass migration from the isolated breakaway state.

At least 10,000 demonstrators gathered in a square in north Nicosia to protest against steps taken by the right-wing government to cut salaries in the civil service and launch a privatisation programme.

Northern Cyprus, recognised only by Turkey, is heavily reliant on financial aid from Ankara. Earlier this month the administration imposed salary cuts of up to 40 percent on its bloated civil service.

It also has plans to sell off the telecoms and electricity providers and the territory's largest university.

"This new package will lead to the mass migration of Turkish Cypriots over the next 10 to 15 years," said Cagtay Karaer, a 42-year-old civil servant.

Northern Cyprus has a population of 264,000, but its demographic makeup is a highly sensitive issue.

Many of its residents are from Turkey. A wave of Turks migrated to northern Cyprus after the Turkish intervention in 1974, provoked by a brief Greek-inspired coup.

The intervention led to the division of the island, and many Turkish Cypriots left, moving mainly to Britain and Turkey.

Greek Cypriots in the south represent Cyprus in the European Union, and a United Nations-controlled ceasefire line separates the two communities. There have been on-and-off attempts to broker reunification over the years, all unsuccessful.

Demonstrators said the austerity measures would add to the hardships of a population already under pressure. "We want a Cyprus where Turkish Cypriots can stand on their own feet," said Dogus Derya, a 31-year-old university professor.

Northern Cyprus's economy is worth some 3.5 billion euros a year, compared with 17 billion euros in the more populous south. A collapse in its construction sector led to a fall of almost 10 percent in economic output in 2008 and 2009, but growth of 1.0 percent is forecast for 2010.

Its revenue is supplemented by Turkey, which contributes an estimated $500 million a year. Although 12,000 people work in its civil service, it is estimated that double that number are on the public payroll.