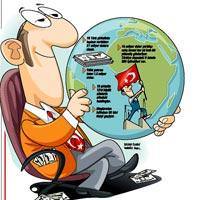 Turkish companies not only survived the crisis that has affected the entire world, but they have also managed to secure roles as global players. Nineteen groups abroad have established 396 firms on six different continents totaling 31 billion dollars in worth, employing 90,000 and raking in 15 billion dollars in revenue.

The 2010 Emerging Markets Global Players (EMGP) report, prepared by Kadir Has University Foreign Economic Relations Committee (DEİK), New York Columbia University Vale Center Columbia (VCC) and KPMG, has been released.
According to the report, 19 Turkish companies qualify as having over 100 million dollars in endorsement. With a combined worth of 31 billion dollars as of 2009, they operate with an international sales volume of 15 billion dollars and 90,000 employees.
These companies operate in six different continents and have 396 shareholders, the breakdown of which is 277 from Europe, 69 from Africa and the Middle East, 25 from South and North America and 25 from Asia and Australia.