Gül: Do not embargo yourselves… 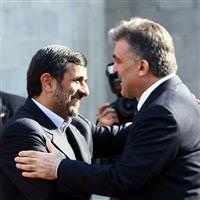 During the first day of his trip to Iran, President Abdullah Gül, paid a visit to the Foreign Economic Relations Council (DEİK), accompanied by over 100 businessmen, where he made an address in which he pointed out that the embargos directed at Iran were directly related to nuclear activities, and requested that businessmen do not restrict themselves from trade with Iran.

Abdullah Gül said, "Do not place embargos on yourselves. Anything from construction to tourism to mining can be done here." Noting that the embargos are not what restricts trade between the two countries is, but in fact Iran's policies do, Gül stated, "If the border gates aren't operating efficiently, if heavy customs taxes are implemented, then who needs an embargo from the United States. You are placing the embargo on yourselves." Gül also emphasized the objective of raising trade with Iran from ten billion dollars to 30 billion dollars.
TWO BANKS DO TRANSFERS
As businessmen shared their woes experienced in trade with Iran to Gül, they stated that Turkish banks were not offering them enough support. Turkey's Young Businessmen Association Executive Board Member Nesrin Serin explained that over the past two years, they have organized five separate trips in which they have acted as intermediaries for 90 million dollars worth of investments, however only Halkbank and Aktifbank will do money transfers.