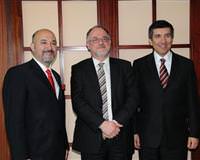 Belgian-based insurance group Ageas, formerly known as Fortis, has agreed a partnership with Turkish conglomerate Sabanci Holding that will allow it to enter the fast-growing Turkish market.

The two companies said on Friday that Ageas would buy 31 percent of Turkey's fourth-largest non-life insurer Aksigorta, half of Sabanci's stake, for $220 million, a 53 percent premium to Aksigorta's market capitalisation on Thursday.

The deal, subject to regulatory approval and expected to be completed in the second quarter, adds to Ageas's existing partnerships with BNP Paribas in Belgium, Tesco in Britain, Millennium bcp in Portugal, UBI Banca in Italy and to its Asian joint ventures.

"The acquisition is a great opportunity for us to participate in the expected growth of the Turkish insurance market," said Steven Braekeveldt, the head of Ageas's division for continental Europe.

Turkey's insurance income is just above 1 percent of the country's annual output, compared with 3 percent in the European Union.

Aksigorta had gross written premiums of 886 million Turkish lira ($562 million) in 2010 and a market share of 8 percent. Almost half of its premium income is from motor insurance.

As part of the transaction, Aksigorta will enter into a 15 year exclusive agreement with Sabanci's Akbank for the distribution of products that can thereafter be renewed for periods of five years.

Aksigorta shares were trading up 2.1 percent at 0830 GMT.