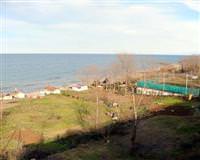 The Saudi Al-Rubeaan Group is preparing to make a 30 million dollar investment into founding a five-star hotel in Trabzon.

The Saudi based Al-Rubeaan Group were the winners of a tender held for the building of a five-star hotel in the north eastern city of Trabzon's Yalıncak district situated along the Black Sea. A decision was made to grant constitution of servitude and usage rights for 15,995.46 square meters of property belonging to the local authorities. Announcing that the committee reviewing the proposals made for hotel development has announced their decision, Trabzon Governor Recep Kızılcık states, "The evaluations were made based on the equity capital of the two companies that provided bids, their stipulated figures for employment and investment amounts, and qualified the findings on a basis of points. According to the final assessment, the joint venture of the Keleşoğlu Company and the Trabzon Young Businessmen's Association had 134.20 points, while Al-Rubeaan Group Hotel Management was evaluated at 294.98."
Stating that the commission's decision has been sent to the Provincial General Assembly for approval, Kızılcık goes on to say, "The Saudi Arabian company that won the tender is extremely experienced. Both the owner and officials of the company came out to Trabzon twice to conduct inspections. They then later decided to go ahead with the investment."
SAUDI COMPANY TO EMPLOY 270
Mentioning that the hotel construction will provide a significant amount of foreign capital for Trabzon, Kızılcık states, "According to the plans, the establishment of the hotel will cost approximately 25 to 30 million dollars. This figure could go up even further. The hotel will employ at least 270 people. This could in turn, contribute to Trabzon's employment rate." Kızılcık also went on to state that the company plans to operate charter flights from Jeddah to Trabzon, which could also result in a significant increase in numbers of tourists visiting Trabzon.