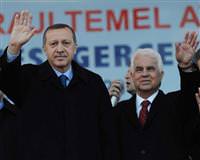 Turkey will soon provide a solution to the water issue suffered by our beloved Northern Cyprus.

Prime Minister Recep Tayyip Erdoğan has laid the foundation for the Alaköprü Barrage in Anamur, Mersin, which will eventually provide the Turkish Republic of Northern Cyprus with 75 million square meters of drinking and irrigation water. Qualifying the investment as "the project of the century" and expressing that they are making dreams come true, Erdoğan states, "We are realizing a grand project of global proportions. We have signed on to a project which is befitting of the Turkish nation."
"WE WILL BE A SOLUTION TO DROUGHT"
Prime Minister Erdoğan states that this method, which is being implemented for the first time worldwide, will allow for water to be transported over extensive distances. Prime Minister Erdoğan states, "It was a number of government's dreams to provide the 'water of life' to Northern Cyprus' fruitful soil. It was my dream when I was the Mayor of Istanbul. To realize this dream now, we have joined forces in order to reach a solution to Northern Cyprus' insufficient water supply."
In July of last year, with the signing of an agreement between governments, the first step was taken to bring the project into fruition. The other end of the line, which will be the Geçitköy Barrage, will be built by the Turkish Republic of Northern Cyprus. Explaining that this project will not solely provide water to Northern Cyprus, Erdoğan states; "We will also benefit from electricity production at the Alaköprü Barrage. In addition, this barrage will provide the irrigation of 3,293 hectares of land in Anamur."
EIGHTY KILOMETERS UNDER WATER
Prime Minister Recep Tayyip Erdoğan states, "We are connecting a water line from Turkey to Northern Cyprus. We will be sending the water under sea from Turkey to Northern Cyprus. The line will be approximately 107 kilometers long, 80 kilometers of which will be under water. Therefore, we are now here for this grand and successful project that we hope to complete within three to four years."
Prime Minister Erdogan to head to Russia with 200 businessmen...
On March 15th and 16th, Prime Minister Recep Tayyip Erdoğan will be heading to Russia accompanied by 200 businessmen. Erdoğan's and his committee as well as at least five ministers will be participating in the Russia-Turkey High Level Cooperation Council (ÜDİK), which is being held in Moscow by Russian State Leader Medvedev and counterpart Ministers. During the premiere's stay, meetings will be held to discuss the lifting of visa regulations for one-month trips between Turkey and Russia, the Mersin-Akkuyu nuclear power station and other mega projects such as the Samsun-Ceyhan pipeline in order to bring the joint trade volume up to 100 billion dollars.