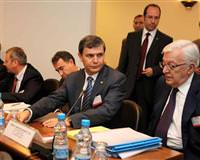 Turkish bank shares rose on Tuesday after the Competition Board imposed fines on seven banks for violating competition and anti-trust rules, as investors registered relief that the penalites were not more severe.

The banking sector index .XBANK on the Istanbul bourse rose as much as 1.6 percent after the announcement, and traded 1.27 percent higher at 1350 GMT, while the 100-share index was just 0.6 percent up.

The banking index had slumped 6 percent on March 1 after banking executives said a ruling against the lenders could spark a sell-off.

"A mountain gave birth to a mouse. The fines are tiny, and banks are bouncing back," said one trader. The watchdog imposed fines totalling 72.3 million lira ($45.4 million) after a probe into collision among banks to attract companies wage deposits.