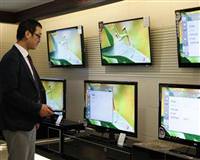 Inside the electronics store the wall-to-wall rows of imported flat-screen TVs switched to a commercial break in perfect synch, beckoning Turkish consumers to do what comes naturally -- spend more.

The day out at one of the shopping malls that have mushroomed across Turkey in recent years has become a feature of family life that an older generation could neither imagine or afford.

"My parents never had it this easy," said Yuksel Turker, 38, who came to shop in one of Ankara's gleaming super malls armed with four credit cards.

"Inflation was very high and even white goods then were hard to buy. Now you can find anything you want and it's accessible."

But there's a homily about having too much of a good thing.

The economy's dependence on energy imports is largely to blame for Turkey's external deficits, but a driving force behind the imbalances is the new consumer habits of Turkey's growing middle classes, who are sucking up credit at historically low interest rates from well capitalised banks.

Turkey's benchmark interest rate has fallen from levels of 16 percent in late 2008, among the highest in the world, to a record low of 6.25 percent.

"This is a completely new phase for Turkish consumers," said Sinan Ulgen, from the Centre for Economics and Foreign Policy Studies think-tank in Istanbul.

"For a long time it used to be that if you had the money, you spent it. With macro-stability Turkish consumers have become acquainted with debt-related instruments and are taking advantage as they want to improve their standard of living."

Banks, competing aggressively for business, opened a total of 485 new branches last year and are doing their utmost to lure borrowers.

It is not uncommon for middle-class Turks to have five credit cards. Huge billboards advertise advantageous loan rates for anything from cars to houses to holidays to weddings.

For decades a financial basket-case sitting on the edge of Europe, Turkey has undergone a dramatic economic transformation as it integrated with the global economy.

Many Turks remember the bad old times when their savings evaporated in triple-digit inflation.

The gains in prosperity have been underpinned by the unprecedented political stability of eight years of single-party rule of Prime Minister Tayyip Erdogan's AK Party.

Conservative on social issues and liberal on economic ones, the AK government has attracted foreign capital and opened doors for Turkish businessmen to make money in the Middle East and Central Asia.

With a youthful and increasingly wealthier population, Turkey's economy is expected to grow 5 percent this year.

Famed for its Ottoman-era bazaars, Turkey is now gripped by a super-mall fever as consumerism has taken hold. Istanbul claims to have Europe's largest shopping center.

But the boom times are bringing new anxieties, and there are fears overheating is posing a threat to stability.

Consumer goods from 3D TVs to Ipods to high-street clothing, made cheaper by a stronger lira, have flooded into Turkey along with energy and raw materials imports, sending the current account deficit deeper and deeper into the red.

For centuries, Turks honoured an Ottoman-era tradition of keeping their saving in gold under the bed, particularly rural women. But as Turks moved to the cities in search of prosperity, households started to take on more debt and save less.

With lower interest rates, Turkish bank loans rose 34 percent in 2010 and Turkish officials say a rise in excess of 20-25 percent growth this year would be unsustainable.

"It's the success of the middle class," said Alexander Kyrtsis, banking analyst at UBS, who said Turkey was going through a "necessary evil" of growth and open free market.

"We saw the same thing in markets like Romania and Bulgaria when they entered the European Union. The economy boomed, everybody wanted to improve their standards of living, there was exuberance, but it all ended in tears and with a 10-15 pct GDP reduction since 2008."

In a bid to curb inflows of "hot money" financing the deficit, weaken the lira and cool credit growth, the Central Bank in December and January cut interest rates. To offset that it also raised banks' reserve requirements to reduce liquidity.

But there are doubts the policies have had the intended tightening effect.

Any abrupt moves to rein in the economy could cost votes ahead of June elections, in which Erdogan's AK Party is seen easily winning a third consecutive term in office.

"Strong domestic demand is not necessarily bad in itself. It is something expected in an emerging economy, but you have to relieve the concerns of investors and authorities need to start taking precautionary measures," said Yarkin Cebeci at JP Morgan.

"It is unfortunate we are in a pre-election period."

Authorities have said they will sanction commercial banks that chase loan growth, but experts say it will be difficult to dampen consumer spending, and the country's salesmen don't see an end to the shopping party any time soon.

"Turkish consumption has not reached its full capacity and there is more potential," said the general manager of a dealership in Ankara that sells luxury foreign cars of up to 200,000 euros and who did not want to give his name.

"There are 75 million Turks getting married, getting jobs, buying houses and buying cars. Turkey is closing the gap in life standards," the general manager said.

"We have entered the global economy. This is the new Turkey."