Iraq-Turkey pipeline repairs to take up to 5 days 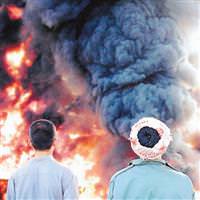 Repairs to the Iraq-Turkey pipeline will take up to five days after a bomb attack in Iraq's northern Nineveh province halted the flow of oil, a spokesman for Iraq's oil ministry said on Thursday.

The pipeline, which carries a quarter of Iraq's crude exports, was shut down after the attack on Tuesday night in al-Hadhar, a district south of Mosul, 280 km (175 miles) north of Baghdad.

"We (the oil ministry) have put a 5-day timeframe to fix it, starting from yesterday. We are trying to shorten this time," spokesman Asim Jihad told Reuters.

"Everybody knows that the oil sector is a target as it is a way to stop the economic cycle of Iraq," he said.

Iraq's oil infrastructure has come under attack frequently since 2003, hampering the country's efforts to boost oil production and exports above the levels that existed before the U.S.-led invasion of that year.

The pipeline from Iraq's northern Kirkuk oilfield to the Turkish port of Ceyhan, has been repeatedly attacked. It has a capacity of 1.6 million barrels per day (bpd) and typically pumps 500,000 bpd.

An official at Iraq's North Oil Company said repairs after Tuesday's blast were expected to take 3 to 4 days.

"After checking with our crew, it appears that a bomb attack by saboteurs damaged the 46-inch export pipeline in the area of Hadhar in Mosul, causing ruptures and halting exports early on Wednesday morning."

"After assessing the damage, we think we need 3 to 4 days to repair the damaged part."

Nineveh, on the frontline of a potentially explosive dispute over oil, land and power between Kurds in their semi-autonomous northern enclave and Iraq's majority Arabs, remains a stronghold of activity by insurgents, including al Qaeda.

Iraq is on the verge of a major expansion of its oil sector after signing a deals with international oil firms to develop some of its biggest fields, aiming to boost capacity to Saudi levels of 12 million bpd from 2.7 million bpd now.

Development depends on whether the country, a member of the Organization of the Petroleum Exporting Countries (OPEC), can secure its oilfields, refineries and other infrastructure against insurgents and militia.

On Feb. 26, militants attacked Iraq's largest oil refinery, killing four workers and detonating bombs that caused a blaze and shut down the plant in northern Iraq.