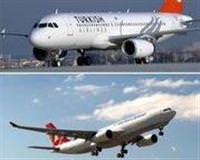 Turkish Airlines may take a majority in Serbia's indebted JAT Airways if an agreement is reached between them, Serbian Minister Sulejman Ugljanin told reporters on Friday.

Last November, the Serbian government chose consultancy firm Deloitte as an advisor in the sale of JAT and gave it a 12-month deadline to analyze the company's finances, find a strategic partner and launch a new airline by end-2011.

"We, as Serbia, gave a free hand to Turkish Airlines to buy as much of a stake as it wants," Ugljanin, a minister without portfolio, said on the sidelines of a meeting of the Turkish-Serbian Business Council in Istanbul, adding it could be a majority.

Ugljanin said an inventory was currently being conducted at JAT on what could be sold to Turkish Airlines (THY).

A delegation headed by THY Chairman Hamdi Topcu will visit Serbia and a decision will be reached on this issue, he added.

"We need a strategic partner to take what's good in the (JAT) company and start making profits," a Serbian government official, who asked not to be named, told Reuters in Belgrade.

In January, Ugljanin told Reuters that the deal with the Turkish Airlines may be reached in March.

Last year, JAT Airways announced a 16.5 million euro ($21.97 million) loss for 2009 and borrowed 51.5 million euros from the government to renew its aging fleet and prepare for a potential partnership with Turkish Airlines.