Americans on the hunt for Bosphorus property 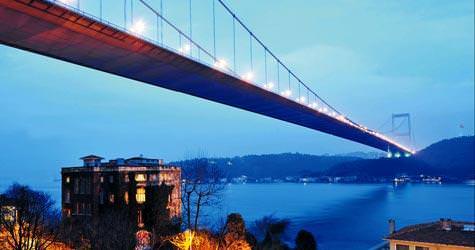 Foreign interest, especially from the United States is on the rise for waterside villas listed in Sotheby's Realty Turkey portfolio. In fact, a famous hotel chain has intentions to turn the Zeki Paşa property into a hotel.

Since adding Turkey in December, Sotheby's Realty Turkey portfolio is drawing significant attention, especially from the United States.
According to International Realty Turkey General Manager Arman Özver, the highest priced property in their portfolio is the Zeki Paşa property in Baltalimanı. "As soon as we added the property to our portfolio, a number of newspapers including the New York Times and the Washington Post immediately called our office in New York to receive further details on the villa." Özver goes on to note that the property, which is worth approximately 100 million dollars, was built during the Ottoman era by a sultan for a minister and has since remained in custody of the same family and states that a famous hotel chain is currently in deliberations to turn the property into a hotel.
FOUR TO FIVE VILLAS ARE IN LINE
Responsible for bringing Sotheby's to Turkey, Hitay Holding Executive Board Member Çiğdem Hitay stateas that they have been approached regarding the sales of four to five more villas located on the Bosphorus Strait.
Özver also states that in addition to receiving interest in purchasing houses, they have also received demand from those interested in selling luxurious properties.
"Amongst those are valuable properties such as villas and mansions, situated on the Bosphorus. We currently have almost 15 listings for valuable properties."
Özver states that America has shown the most interest in the Sotheby's portfolio, however they have also received intesret from Turkish Republics, Russi and the Gulf nations."
'There was an opening in luxurious real estate'
Hitay explains that their portfolio is not limited to villas and mansions and that they do have studio flats and one bedroom condos starting at 250,000 dollars. "Since the day we opened, and due to the demand we received, we have been aware that there is an opening for better service in luxurious real estate. There are a number of individuals that want to sell their luxurious properties but want to ensure they are sold to the right people."
150-YEAR-OLD VILLA
The Zeki Paşa Villa located in Baltalimanı, was built 150 years ago by French architect Alexandre Vallaury who was commissioned by Sultan II. Abdülhamit, for his minister Müşir Zeki Paşa. The property boasts five levels and 23 rooms, a 3,000 meter-squared enclosed area, 4,000 square meters garden and a 130 meter-long dock.
Alaçatı Taş Hotel for sale for 3.2 million Euros
With the exception fo the villas in the portfolio, the Taş Hotel in Alaçatı was the first commercial property listed in the portfolio. Accordingly, the Taş Hotel was valued at 3.250 million euros. Stating that Taş Hotel was only recently added to the portfolio, Hitay states, "I wish I had the time, I would want to buy it."
In 2001, entrepreneur Zeynep Öziş, transformed the 110-year-old Greek residence into Alaçatı Taş Hotel, which has since become one of the top boutique hotels in Europe.