Turkey's PM goes to Russia with gas in mind 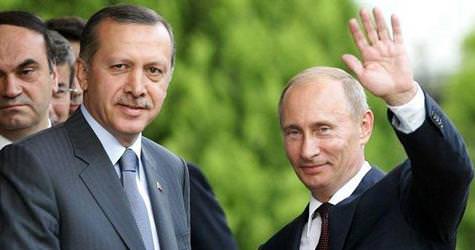 The price of Russian gas and the future of several energy projects, including a $20 billion Russian-built nuclear plant, loom over a visit by Turkish Prime Minister Tayyip Ergodan to Moscow this week.

Last year the two set a target to expand trade from $26 billion to $100 billion within five years, reflecting how far relations have come since the Cold War era, when Turkey stood as NATO's eastern outpost.

Accompanied by Foreign Minister Ahmet Davutoglu and Energy Minister Taner Yildiz, Erdogan is due to meet both Prime Minister Vladimir Putin and President Dmitry Medvedev during the visit that begins on Tuesday and ends on Thursday.

Since Erdogan's AK Party came to power in 2002, Turkey has moved away from being Western-focused. Improving relations with neighbours, including Russia and other ex-Soviet bloc countries as well as fellow Muslim neighbours became a priority.

Straddling a Eurasian landbridge, Turkey wants to maximise strategic benefits by binding itself with neighbours through a series of trans-border gas and oil pipelines that will earn transit fees and guarantee fuel supplies for its rapidly growing economy.

Turkey is a major player in the $10.8 billion Nabucco project, backed by the European Union, to pipe gas from Turkmenistan to Europe, while Russia has proposed the rival South Stream pipeline, under the Black Sea and through Turkish and Bulgarian territorial waters.

Russia last week said it may drop plans to lay the underwater section and build a liquefied natural gas plant instead because of risks posed by new European energy rules.

Turkey buys 64 percent of its gas from Russia, 40 percent of oil and a large amount of coal too. As a result, Russia's total exports to Turkey in 2010 were $21.6 billion, whereas Turkey's exports were just $4.6 billion.

While Russia's Gazprom (GAZP.MM), the world's largest gas producer, has already offered discounts to some Western customers, discounts for Turkish state pipeline operator Botas have not been settled, with discussions focused on the "take-or-pay" element in the contract.

Competing against other states to secure supply, Turkey had contracted to buy more gas than it actually uses and now wants to move to more flexible terms. It also wants a new formula to determine prices and move off the oil index.

Botas will sell its contracts to import 6 billion cubic metres of Russian gas to private-sector firms, and a Gazprom unit is among the companies interested. Gazprom also wants to build underground gas storage units in central Turkey.

On crude oil, Russia may supply 25 million tonnes per year, or about half of the capacity of a planned pipeline from the Black Sea to the Mediterranean that is strongly backed by the government. No deal has been signed. Energy analysts say Turkey must weigh the benefits of interdependence against the risks of overdependence.

"There is a danger that Turkey could become too overly dependent on Russia for energy," Gareth Winrow, director of research at Sidar Global Advisers, said.

"It's not just the natural gas; it's the nuclear, when Turkey will become dependent on imports of enriched uranium from Russia and on Russian nuclear technology."

Pamir said the terms lack technology transfer, power from the plant would be too expensive, and it would increase overall dependency on Russia.

Turkish officials expect some discussion on the phasing and Turkish firms' involvment during this week's meetings.