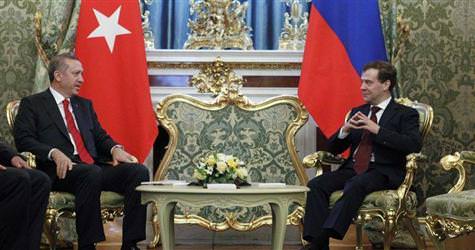 The leaders of Russia and Turkey, calling nuclear energy safe, promised on Wednesday to press ahead with the construction of a Russian atomic power plant in Turkey despite Japan's nuclear crisis.

"Everyone is asking a simple question: can atomic energy be safe?" Medvedev told a news conference in Moscow after talks with Erdogan.

"The answer is clear: it can be and is safe, but for this it is necessary to make the right decisions about the location of the plant, about the design and the operator."

Turkey and Russia signed an agreement last May for Russian state nuclear corporation Rosatom to build a $20 billion, four-reactor plant near the coastal city of Mersin, some 25 km (15 miles) from an active fault line.

"Our investments will continue in the light of logic, science and experiment, we will take every possible precaution," Erdogan said.

"But there are things that human power is inadequate to prevent, like natural disasters. This will not affect our plans and schedule for the nuclear power plant."

He later told Russian Prime Minister Vladimir Putin he hoped work to lay the foundation for the plant could begin in late April or early May.

Japan's nuclear crisis is developing according to the "worst-case scenario" and that would have an effect on Rosatom's plans for building nuclear power plants abroad, Rosatom head Sergei Kiriyenko said.

NO DEAL ON GAS

Erdogan's Moscow visit was focused on energy affairs but the two sides failed to achieve a breakthrough on gas cooperation on Wednesday.

Turkey, which imports 64 percent of its gas from Russia, is looking for discounts due to a slump in demand resulting from the recent global recession, but met resistance from Medvedev.

The Kremlin leader said Russia wanted to stick to the principle of 'take or pay' of gas export monopoly Gazprom's long-term supply contracts, but did not rule out some adjustments to take into account market conditions.

"We intend to maintain our existing approach, but ... we have told our Turkish partners that in certain cases, we are willing to consider other approaches," Medvedev said.

"This is a question that should be resolved on the basis of existing contracts and the goodwill of both sides."

Russian Deputy Prime Minister Igor Sechin said separately that no agreement has been reached with Turkey on the proposed South Stream gas pipeline that would cross its Black Sea territorial waters.

Turkey is a major player in the rival $10.8 billion Nabucco project, backed by the European Union, to pipe gas from Caspian energy producers such as Azerbaijan to Europe.