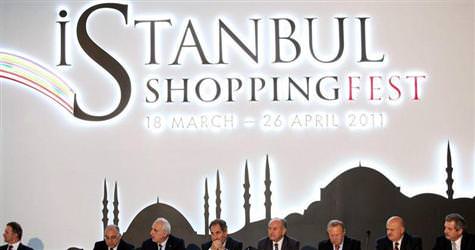 The 40 days and 40 nights’ long Istanbul Shopping Fest begins tonight with a ‘gong’ at 20:30 at both İstinyepark and Torium. Shopping sales will continue until 2:00 am at malls throughout the city.

Companies have increased their stock by 30-70 percent for the festival during which purchases will only be allowed by credit card. The VAT return will be increased to 75 percent at Tax free shops. According to ISF Co-Chair Yılmaz Yılmaz states that 300,000 commercial establishments are involved in the festival and throughout the duration, 42 of Istanbul's largest shopping centers and streets will be offering up to 40 percent discounts.
ISF Co-Chair Hakan Kodal explains that tourists visiting Istanbul tend to refrain from spending significant money and therefore, "Our objective is to get our tourists to spend. With the festival, we aim to bring the 580 dollar figure of average tourist spending up to over 1,000 dollars." According to Kodal, with the exception of food products, the retail sector currently reaps 1.8 billion dollars; the objective is to bring that figure up to ten billion dollars by the year 2023.
For forty days, Istanbul Shopping Fest will host street fairs, concerts, performances, parties, fashion shows as well as events for children. Shopping Centers will extend their opening hours to eleven p.m. and on Saturdays, a shopping center on either side of the bridge will remain open until two a.m. Discounts will be offered after 20:00.
Every consumer that spends 40 TL will have the chance to win a car or a house.