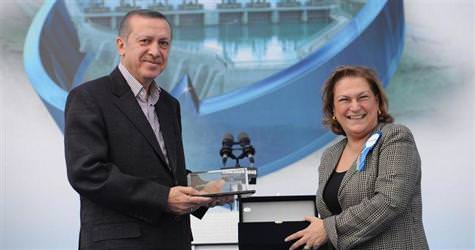 Speaking at the opening of the a 120 million Euros Hacınınoğlu regulator and hydroelectric power plant in Kahramanmaraş, Prime Minister Erdoğan stated that nuclear investments were mandatory in order to cover the energy deficit.

The joint Sabancı Verbund venture Enerjisa has officially realized the Hacınınoğlu regulator and hydroelectric power plant in Maraş. At the plant's opening, Prime Minister Recep Tayyip Erdoğan stated that by 2023 they hope to have established an input of 100,000 MW. "We need to invest five billion dollars yearly for energy. Ten MW of this capacity will now be provided y the nuclear power stations to be built in Mersin and Sinop."

1100 MW'S OF ENERGY
Reminding that the foundation for the power station was laid in 2008, Erdoğan states, "It is possible to take these kinds of steps for the future of our country and our people from such a difficult place." Announcing that with the newly opened HES (Hacınınoğlu Power Plant) Turkey has acquired 100 MW energy power through natural gas, wind and hydroelectricity. The most significant aspect of these investments, according to Erdoğan is employment opportunities. Erdoğan went on to state that with the completion of other investments in the region, a total of 1.5 billion KW/H electricity production capacity will be realized. Emphasizing that Turkey is not rich in petroleum and therefore is dependent on external factors to produce energy, Erdoğan states, "In order to decrease our dependency we have to use our resources productively. We have changed the famous saying that 'water will run and Turks just watch' to 'water will run and Turks will make it so.' We cannot live without electricity in this era."
Reminding that over the past eight years, over 25 billion dollars have been invested in energy; Erdoğan went on to state, "We have increased our strength to 50,000 MW with founded plants. With wind, we have reached 1,360 MW. We have used 4.6 billion dollars in sources to seek petrol. We have now become a country that can import electricity. There are comments being made these days that we do not have enough information regarding nuclear energy. There are 442 nuclear power plants. Do we not get into cars, even though there is a risk? This sort of understanding results in saying 'no' to logic, knowledge, experience and the products that arise from the start, when it is finished however, they press the 'yes' button and go on."