Protests cause a strike to visa-free economy 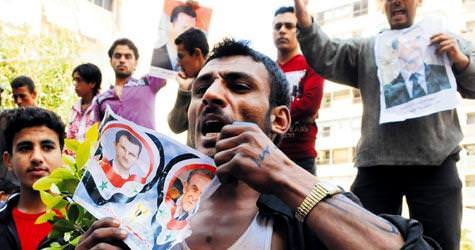 As the developments which erupted ten days ago in Syria continue at an increased pace, echoes of the turmoil are being felt in Turkey’s business world. The ongoing protests in Syria are casting a shadow on economic relations which was gaining acceleration due to the lifting of visa regulations in 2009.

The political unrest which has aroused in Syria for approximately the past ten days has Turkish investors concerned. The developments which began in Deraa, then moved on to Lazkiye and is now even approaching our borders, is resulting in ringing alarm bells for exporters and investors alike. With nearly one billion dollars in industrial investments incurred since the lifting of visa regulations in 2009, discussion is now veering toward taking precautionary measures should the incidents in the neighboring nation escalate. Syria, which especially significant for neighboring cities Hatay and Gaziantep due to both tourism and commercial endeavors, has been in turmoil since the protests erupted on March 18th in Deraa. According to officials 30 people have died thus far.
NEWS CAME BEFORE THE SMOKE SIGNS
According to Hatay's Industry and Businessmen's Association (HASİAD) Chairman Yahya Kemal Nalçabasmaz, they have already begun to witness negative reactions to the developments in Syria. "Even though the smoke signs have not yet arrived, the news has, which has resulted in increased anxiety in investors." Expressing that recently relations with Syria were reaching a very affirmative level, Nalçabasmaz states that a solution must be reached immediately to counteract the tension developing in the region. "The confusion in Syria will not only negatively affect the industry, but also tourism."
EARLY FOR APPREHENSION
According to Sanko Holding's Chairman of the Executive Board Abdülkadir Konukoğlu, also from Gaziantep, "Syria is one of the countries we have the largest exports to. It's still too early for apprehension; the events have not yet reached that point." However, emphasizing that caution is still warranted, Konukoğlu states, "As Turkey, we need to not interfere in our neighbors internal affairs and we must take steps that are as constructive as possible."
Turkey's Hotelier Federation Chairman Ahmet Barut states however that the positive effects on tourism derived from the lifting of visa regulations will inescapably be affected by the developments.

TURKISH INVESTMENTS TO A TUNE OF ONE BILLION DOLLARS
According to official figures, there are approximately 300 million dollars worth of Turkish investments currently in Syria. With the inclusion of Turkish investments in Aleppo and the surrounding regions, which are not included in these statistics that figure computes to one billion dollars.
Amongst the prominent Turkish investors in Syria are Güriş with two cement factories (Rakka and Kamışlı), Dedeman Group with three hotels (Damascus, Aleppo and Palmeria), Anadolu Group's Coca-Cola Beverages distribution organization, two textile factories in Aleppo belonging to Akteks and two textile factories also in Aleppo, belonging to the Syria-Turkey Commerce Center.
The trade volume between Turkey and Syria, which was at 730 million dollars ten years ago, is anticipated to surpass five billion dollars by the year 2012.