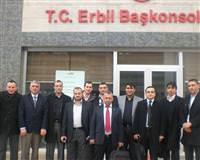 Anti-government revolts around the Arab world have turned Iraq into an attractive investment alternative despite its stubborn insurgency, still capable of lethal attacks eight years after the U.S.-led invasion.

More than 180 Turkish companies visited the war-battered country, which needs $600 billion in foreign investment, this week to discuss business, trade and investment opportunities as conflict and protests hit countries elsewhere in the region.

Iraq is trying to rebuild after decades of war and economic isolation and is seeking foreign investors to help reconstruct its dilapidated infrastructure.

Investors like Turkish construction firm Nursoy, which is hoping to tie up a $600 million housing project in Iraq, say that security in Iraq has improved and its democratically elected government signals it is more stable than some of its neighbours.

Although the country has not been immune to protests sweeping other parts of the Middle East and Africa, Iraqi demonstrators have mostly not called for the removal of the elected federal government -- formed in December.

Instead, they have demanded better basic services and called for some local officials to step down.

"There are revolutions in other countries while Iraq has passed this period. Now is the start of a secure period (in Iraq)," said Orhan Nurduhan, chairman of Nursoy, which set up a $1 billion housing project in Iraq's semi-autonomous Kurdish region in 2003.

While overall security in Iraq has improved since the height of sectarian warfare in 2006-07, bombings and attacks remain a daily occurrence and insurgents are still capable of carrying out lethal attacks.

An attack on a provincial council headquarters in Tikrit, late dictator Saddam Hussein's hometown, on Tuesday resulted in 58 people killed and 98 wounded after gunmen stormed in and took hostages.

Nurduhan said Nursoy hoped to sign a $600 million contract with Iraq next week to build 1,600 flats in the fortified Green Zone in central Baghdad. The firm has been negotiating the contract, which Nurduhan said could go up to $1 billion, for four years.

"The political, economic and security stability Iraq enjoys, despite some troubles we are passing through, is one of the reasons that makes countries look into Iraq," Sami al-Araji, chairman of Iraq's National Investment Commission, said while hosting a Turkish-Iraqi business forum.

He said Iraq needed to build 24 hospitals with a capacity for 400 beds each in addition to the 10 hospitals currently under construction, and said it needed to install power plants to generate 10,000-15,000 megawatts in 2011 and 2012.

Turkish company Summa, which specialises in building hospitals and hotels, said it was looking at investment opportunities in Iraq after suspending some of its work elsewhere in the Middle East and North Africa.

"We are looking forward to work here. Our business now in Libya is on hold," said Summa president Selim Bora, who was part of the business delegation. "Iraq is one of the alternatives."

Bora said Summa had put its $300 million business in Libya on hold due to the civil war in the North African state and was considering Iraq as a business alternative.

"It will take us some time to study the exact location and the exact type of investment but I see it is the right time to do this," he said.