Turkey has done it! 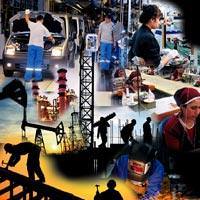 While Europe and the USA struggle with the aftermath of the global economic crisis, Turkey has become one of the fastest countries to recover, evident by an 8.9 growth figure for 2010… Turkey is third in the G-20 in terms of growth and is the leading nation in Europe.

Capturing 8.9 percentage growth in 2010, as of the third quarter in 2009 Turkey had embarked upon an upward trend.
According to figures from the Turkish Statistics Institute (TÜİK), 9.2 percent economic growth was realized in the fourth quarter of 2010. In terms of growth figures out of the 20 developed countries, only Brazil and China managed to surpass Turkey. Considered the 'engine power' of global economic growth, China realized 9.8 percent growth in the fourth quarter of last year in comparison to figures from the year prior. The year before, China's economy grew by 9.2 percent, whereas last year that figure increased to 10.3 percent. G-20 members Turkey and Argentina recorded 9.2 percentile economic growth in the final quarter of 2010 in comparison to the year prior. Therefore both Turkey and Argentina managed to become the fastest growing nation economies with 9.2 percentile amongst G-20 nations, following China for the aforementioned time period.