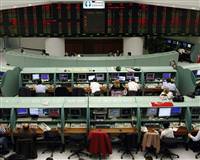 The Turkish lira hit a fresh two-month high on Friday and benchmark bond fell as markets bet soaring fourth-quarter growth made the central bank more likely to lift its policy rate from a record low.

Turkey's $735 billion economy notched up growth of 8.9 percent in 2010, its highest rate since 2004, with expansion in the fourth quarter stretching to 9.2 percent -- renewing fears of economic overheating.

"Much higher-than-expected growth figures briefly pushed the benchmark bond yield above 9 percent yesterday on expectations the bank will raise rates. Those expectations will again drive yields higher today and the release of a new benchmark bond this month is also spurring some selling," said a bonds trader.

According to the latest central bank survey of analysts' forecasts, interest rates are seen 50 basis points higher at 6.75 percent by September -- a sign the central bank which cut rates in December and January will at some point have to bow to looming inflation risks.

The lira has strengthened for a fourth straight day this week.

Technical analysts at Tradition brokerage said the lira still had a gaining bias but the move was not particularly strong: "stay with the trend but keep stops fairly tight: sell into any strength that may occur to target strong prior low support at 1.5369".

The lira is now around two percent weaker than its level prior to the start of the central bank's new policy of rate cuts combined with increases to banks' required reserve ratios (RRR) in order to deter hot money flows and stall credit growth.

Analysts say the lira is again starting to attract some carry trade as bond yields and rate rise expectations rise.

Concerns about the central bank falling behind the curve in fighting inflation and lower profit expectations for Turkey's banks due to the higher RRRs have seen Turkish stocks, star performers of 2009 and 2010, lose 2 percent of their value since the start of the year, underperforming other emerging indexes.

Uncertainty over whether such tightening involves a rate increase or another increase to RRRs is keeping assets rangebound for now, analysts say.

The market focus has shifted to March inflation data due on Monday after retail prices in Istanbul, Turkey's largest city, rose 0.83 percent month-on-month in March, the Istanbul Chamber of Commerce said on Friday.

Annual consumer price inflation hit a 41-year low in February but that did little to quell market concerns that the central bank risks falling behind the curve as it keeps its policy rate at a record low despite economic growth of 8.9 percent last year and persistent high credit growth.

Analysts polled by Reuters see year-end CPI at 7.00 percent, way ahead of the bank's year-end target of 5.5 percent and most recent year-end forecast of 5.9 percent, which is based on an assumed oil price of $95.

Middle East turmoil has driven oil prices to around $117 LCOc1 -- a huge extra burden for Turkey which imports 95 percent of its crude needs.

The latest Turkish PMI data for March showed the index falling to a five-month low of 56.1 points, which could indicate loan growth and consumption growth is slowing, as desired by the central bank.

Gains in stocks were supported by a global rally after an upbeat U.S. employment report signaled the recovery in the world's largest economy remained firmly on track.

Among shares Arcelik (ARCLK.IS), a white goods maker, rose 2.2 percent to 7.3 lira after saying it extended a contract to make LCD screen for Sony.