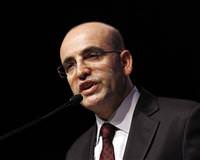 Minister of Finance Mehmet Şimşek has announced that in order to facilitate tax payments, credit cards will soon be accepted for payments to the state.

The Ministry of Finance has pushed the button for a series of new procedures regarding public debt payments, including allowing for installment plans and credit cards.
Considered an incentive took for recorded economy, the state now plans to allow the use of credit cards for payments in all state departments. According to the procedure currently in place, all taxes and fines as well as overdue vehicle taxes, traffic fines and administrative fines are payable by credit card. Taxpayers are able to make credit card payments from the revenue administration website. The new procedures that the Ministry of Finance plans to implement, however, includes allowing the use of credit cards for all debts to the state including payments such as rent, electricity, water, loans etc.
The matter of allowing the public to use credit cards in state payments has brought to the parliament. Minster Şimşek responded to a question regarding the new procedure, by stating; "Payment options are being deduced to facilitate the public in paying their debts to the state. It is now possible for taxpayers to make payments through banks and post offices. Meanwhile, banks have been granted the authority to procure payments for vehicle tax registration, traffic fines, toll roads and administrative fines. In addition, efforts are currently ongoing to allow for credit card payments on all other state payments."
ELECTRONIC BILLING MODEL
The decrease in use of cash money is a significant contributor to the Unrecorded Economy Prevention Strategy Plan. The plan is expected to be signed by Prime Minister Erdoğan and announced as a memorandum in the upcoming days. According to the plan, the electronic billing model integrated into the banking system will become increasingly widespread nationwide.